It takes more than 2 good shots to tame No. 9 at Prairie Highlands in Olathe 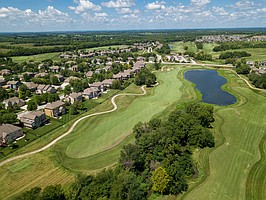 As you approach the back tees on the ninth hole at Prairie Highlands Golf Club, you might think you took a wrong turn and are suddenly standing in the middle of an open field on the plains of Kansas.

With thick prairie grass surrounding all four tee boxes, you almost can’t even tell you’re still on a golf course until you actually reach the tee and get ready to hit your shot.

It’s a fitting scene for a course named Prairie Highlands and it’s a terrific setting for the final hole on the front nine at this fun course in west Olathe.

The beauty of this position is that it offers you fabulous scenery and very little stress. You can pretty much hit your tee shot as far as you can without running into trouble and the wide open fairway allows for all kinds of safe landing spots.

There is a small lake to the right and trees and houses up a bit of a hill to the left, but neither come into play unless you spray your drive dramatically left or right.

That’s exactly the kind of setting one needs to tackle this 570-yard par 5 that’s every bit as long as that distance suggests.

My drive was solid here. It landed in the center of the fairway and looked nice and safe the entire way. The only regret I had was how high it went. There was a lot more wind present up top than I realized on the tee box, and hitting it so high cost me a little distance. Not enough to whine about, though, as I easily carried all four tee boxes and landed well into the fairway, no small feat for a 15 handicap playing from the championship tees.

As I approached my second shot, it was clear that I was going to be able to swing away once again. The best club in my bag is and always has been my 3 iron — I’ve tried hybrids and fairway woods but can’t hit them any better than my oldest friend — so I pulled out my favorite club and let ’er rip.

I knew I couldn’t reach the green in two — I knew that even before I hit my drive — but the shot was solid. It hugged the left side and curved back right settling about 5 feet into the fairway off the left rough about 110-120 yards out.

It should have been an easy wedge into the green from there and a good look at birdie once I was finished. The green is not that big and the pin was up and I had a great angle into it. But the water on the right, which no doubt played a role in my second shot hugging the left side, comes into play much more as you get near the green that is protected by water on the entire right side and a bunker and tall grass to the left and back.

None of that should matter from 110 yards out, but I pulled my third shot left to avoid the water and landed just shy of the tall grass protecting the green on the left about 12 feet off the green.

I was OK with the shot and the result, though, because going right is an automatic penalty stroke and going long puts you on the road between the No. 9 green and clubhouse parking lot. No need to dabble with either of those areas. The wind up top may have been a factor here, too, but it also may have kept me out of that tall prairie grass, so no complaints. 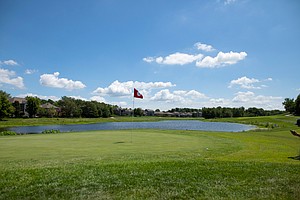 At that point, even though I was standing in the center of all kinds of trouble, I felt pretty safe and it was clear to me that a bogey was the worst I would get.

From there a quick pitch to the front pin — often my nemesis — set me up for a par putt and the ball would have wound even closer to the cup had it not been for some wet and heavy sod just in front of the green that caught my first bounce and forced my ball to check up way more than I expected.

I still had about a 12- to 15-foot par putt that was very makable. I had the line, hit a good putt but didn’t hit it enough and left it 10 inches short for a tap-in bogey.

This was a fun hole on a golf course full of them. It’s a terrific finishing hole and it’s probably best that it finishes the front nine rather than the entire round because if you had to play this beast as your 18th and final hole of the day, you might not have the energy and stamina to conquer it.

So swing away, stay left as often as possible and go grab a snack and a drink as you make the turn after finishing.

It’s easy to see how your performance on this hole could springboard you to a good round after gaining a little momentum for the back nine.

Book your tee time today to take your shot at taming No. 9 at Prairie Highlands. And tell ’em Tait sent ya. 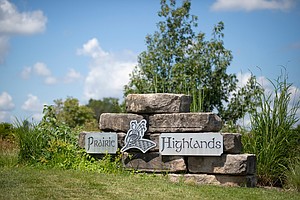 Be sure to enter this week to win a free round of golf at Prairie Highlands.

Last week's winner of a round of golf, with cart, for four OR one hour in the Hidden Springs Golf Course virtual golf simulator was Alan Garcia. Congratulations!