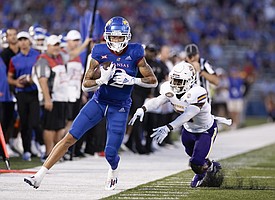 Kansas wide receiver Lawrence Arnold (2) is shoved out of bounds by Tennessee Tech defensive back Jyron Gilmore (6) during the second quarter on Friday, Sept. 2, 2022 at Memorial Stadium. by Nick Krug

Entering the week, and after seeing the initial betting line (WVU -13) I figured I would take West Virginia to cover against Kansas this weekend in Morgantown.

And I still definitely think that’s possible, perhaps even likely.

The Mountaineers are reeling a little after their tough loss at Pitt last week, during which they made a bunch of mistakes and contributed to their own demise.

But there was enough there to see that the Mountaineers have plenty of talent when they put it all together. That’s particularly true up front and with their running game, and JT Daniels is a more-than-capable quarterback.

Kansas will be tested big time on both sides of the ball this week, but, for me, the Jayhawks’ ability to stay in the game — or not — will be largely dependent on their offense.

It’s no secret that the Jayhawks love their running game. And even though the opponent was inferior last week, there were signs of that running game being legit.

The chemistry between the backs and the O-Line and the offensive linemen themselves looked good. KU’s depth in the backfield showed up. And their ability to rotate those backs in allowed for fresh legs on most snaps.

If they can use those things to their advantage this week, therein keeping control of the clock and keeping the Mountaineers’ offense off the field, this one could be interesting.

Jalon Daniels is going to have to be dialed in and he likely won’t have as much breathing or time to operate as he did last week. That makes quick decisions, smart play and leaning on those running backs all a critical part of his performance, as well.

The challenge for KU’s defense will also be much tougher than it was a week ago, but I loved the way the front seven played in the opener and I think we saw a lot of things with that group that can and should translate to the step up in competition.

The KU secondary will have a much tougher challenge this week, and that could be where the Mountaineers look to attack the Jayhawks.

I won’t lie; it’s tempting to pick KU. And I think they can win this game. But they’re going to have to play nearly perfect football to get it done, and, with this group, I still want and need to see that against legit competition before I start picking Lance Leipold’s team in a Big 12 game on the road.

That could be coming in the not-too-distant future. And KU’s performance in this game could give us a better indication of when that might be.

Clearly Matt Tait is not a homer. Whereas Stan Weber would pick the KSU Wildcats to beat the Chiefs. Jayhawks not only cover the spread (+13.5) but pull the upset on the road. Although betting is now legal in Kansas, don’t risk any money on my totally uninformed from the heart unsolicited opinion. Rock Chalk.

It was interesting to rewatch last year’s game. They ran all over us. JT should be a better QB, but it wasn’t like Doege was a problem for them.

It helped that Potter got a pix 6, but it certainly didn’t help that JD threw 2 picks in the end zone. APH had a pretty solid game, though we used him very little. Maybe because he was the only RB left, though we did try a true freshman for a few plays near the end.

Lots has changed, and yet the lines are pretty much the same. I’m having a hard time seeing them being a TD better this year, except in the decade deep rut of preconception. Sorta like the one that forever starts with ut ranked.