Can Kansas' running game keep the Jayhawks competitive as the opponents get tougher? 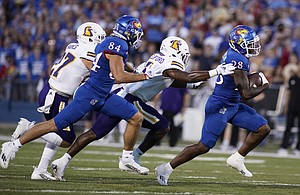 Kansas running back Sevion Morrison (28) takes off up the field past the Tennessee Tech defense during the second quarter on Friday, Sept. 2, 2022 at Memorial Stadium. by Nick Krug

With Big 12 Conference play starting this weekend and the Kansas football team likely to be an underdog in nearly all of its remaining games, it’s time to shift the focus to what the Jayhawks can do to stay in games and compete into the fourth quarter.

The easiest way to do that is by controlling the clock through running the football and KU Offensive Coordinator Andy Kotelnicki said this week that he viewed that to be a “critically important” part of any game plan, underdog or not.

But while the old concept of Kansas keeping its offense on the field to keep the high-powered opponent off it still holds water, Kotelnicki said the Jayhawks have bigger goals this season.

“Our evolution needs to be to make sure we’re finishing those drives however they look,” he said Wednesday. “The most important metric in football is your points per possession. When you’re on the field, you need to finish with points. If it takes 20 plays to go do that, fantastic. If it takes one, great. But we want to be able to end those things with touchdowns.”

KU did just that last Friday night in its 56-10 win in the season opener. The Jayhawks had the ball 11 times against Tennessee Tech and converted that into seven touchdowns. Kansas actually scored eight TDs in the win but one came via a blocked field goal on special teams.

Still, a 64% success rate with the football is pretty darn good. It also came against an FCS opponent that was overmatched physically. West Virginia will not be. But that doesn’t concern Kotelnicki all that much.

“I’m excited about the test that we’re about to take,” he said of Saturday's 5 p.m. showdown in Morgantown on ESPN+.

The biggest reason is it gives KU another opportunity to establish the type of offensive identity it wants to have both this season and well into the future.

“There’s still a really physical element to football and we want to embrace that,” Kotelnicki said. “We want to thrive in that environment. That’s who we want to be.”

Having five running backs capable of carrying out that mission certainly does not hurt. The Jayhawks’ deep and talented stable of running backs made its presence felt in limited opportunities last week. The lopsided nature of the game kept KU from running up the rushing totals for Devin Neal, Daniel Hishaw and Ky Thomas. Sevion Morrison and Tory Locklin also played meaningful snaps in the opener, and Morrison and Kotelnicki both said they would like to see that continue, as well.

“I think our coordinator loves that because if we need to we can get a running back in the game that fits that situation and does what needs to be done,” Morrison said on Wednesday. “And we can stay pretty fresh with all those backs.”

“Fantastic,” he said of the idea of using multiple backs on a regular basis. “Because, in theory, everyone should be still pretty fresh. If you can go on one of these long drives and, all of a sudden, fresh legs come in every three carries, that’s good. That can be tough on a defense. Real tough.”

Regardless of whether you view it as KU trying to shorten the game to stay in it as long as possible or as a staple of the Jayhawks’ offensive philosophy, Kotelnicki emphasized this week that the running game was going to remain a key part of KU’s attack week in and week out.

“I don’t know that I’d ever say you move past that,” he said. “Because (when you look at) how an offense controls a game, time management is one metric that someone would use to do that — staying on the field, keeping your defense off the field.

“For anyone’s success, I think you have to establish a run game. For us to do that, (would be) a good first step in our journey.”

KU wide receiver Quentin Skinner on the challenge at WVU & what he wants to see from the Jayhawks… by KUsports.com

Kansas RB Sevion Morrison on what ball control can do for the Jayhawks… by KUsports.com

KU D-Lineman Caleb Taylor on what stands out about the West Virginia offense by KUsports.com

Unimpressed by the red zone play calling early in the game.

Army runs the ball 150% of the time, and it still works. Why? Execution. O.C.'s who also have access to the passing game need to remember this. No need to get cute, just run the effing ball and teach your guys how to execute.

The margin for error for KU football is extremely thin. The O.C. needs to be on his game from the start. If we miss a score when it is there, it's on the O.C., and it will cost us the game. Points in the first quarter count exactly the same amount as points later. No more lazy, wunderkind calls when we can see the end zone. Get the ball in. That's your job. Quit effing around.

Running game will determine everything this year...you have heard the phrase "no MON...no FUN"....in this case..."no RUN...no FUN"...lucky for us...I think we have a running game that will gash a lot of teams on the schedule...if they work extremely hard on their techniques and play SMART...knowing the playbook...knowing each opponents tendencies at the point of attack...trusting one another.

Running in a throw first conference could work to our favor, but a balanced attack is always the way to go.

There is an old saying, that if you can run the football And stop the opponents run game, you will be successful.

For KU to be competitive in Big 12 play, it is also critical that we can limit the opponent's running attack.

Coach Leipold has mentioned this on a few occasions. He knows we have to improve over last year.

KU is really going to surprise a lot of people this year.

Or, people will watch the film and will scheme to try defend it.

Switching RB's every couple of plays like last week prevents the offense from getting into a rhythm.
Feed Neal until he is tired then do the same with Hishaw.