Things are about to get tougher for Kansas football, but it's hard to pick against the Jayhawks right now 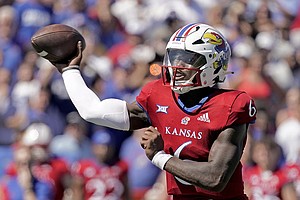 As the University of Kansas trends toward a second consecutive sold-out football game at David Booth Kansas Memorial Stadium, the talk around campus and Lawrence in general is all about these Jayhawks.

Don’t get me wrong, basketball’s still on the minds of KU fans — that’s the case 365 days a year — but these days even the talk about Kansas basketball seems to be directly tied to the football team’s 4-0 start.

I can’t tell you how many people I’ve heard say, “Can you believe we’re not talking about the basketball team yet,” while others have said, “It’s sure nice to not be counting down the days to Late Night.”

Be that as it may, the fact of the matter is, both KU programs are deserving of a ton of attention right now. Lance Leipold’s football team is doing things we haven’t seen in more than a decade. And Bill Self’s squad is headed toward a preseason top-5 ranking as the defending national champs.

That alone, along with the ring and banner festivities planned for Late Night in two weeks, would be enough to send the Kansas fan base into a frenzy. But the fact that the football team is finally doing its part again shows us what’s possible.

Self and others have said for years that nothing energizes a college campus quite like a good football team in the fall. We’re starting to see that again, and Leipold, though possibly a little biased, is in complete agreement with Self’s thoughts and happy to be contributing to the vibe of excitement throughout the KU community.

“I’ve always felt strongly about that,” Leipold said of football’s role as a tone setter. “I think that’s true in the high school ranks. High school administrators and principals talk about what it does to hallways of a high school when the school year gets kicked off and your high school football team is playing well.”

Leipold continued: “We are very unique because of our rich tradition in basketball. They’ve been carrying the torch for so long. We understood (the challenge) when we arrived, but understanding what it can do for a community, and coach Self has been very supportive in that. We are just trying to do our little piece in this thing.”

So far, they’ve done that and more. This Kansas football team all of a sudden has a few players who are household names. And that list seems to be growing by the week.

Remember the year when there was so much drama on campus that members of the football team and basketball team actually were involved in a bit of brawl?

There’s nothing even close to that happening today. Self’s players have been as supportive of Leipold’s 4-0 football team as anybody, and coaches and athletes from other KU programs also have provided serious support, both by showing up on gameday and by showing love on social media.

It’s clear that this athletic department is in sync again and that everyone connected to it fully understands the importance of a good football program.

For years, support for football has been the missing ingredient at Kansas. That’s no longer the case and now it’s up to Leipold and company to show that they can sustain this type of success.

That doesn’t mean they have to win every game. But they need to stay relevant and competitive and continue to put on the kind of show that people want to cheer for and buy tickets to watch.

KU’s staring at a golden opportunity to do just that, with back-to-back home games against Iowa State and TCU, both of which look like they’ll be single-digit favorites over the Jayhawks.

Win both games and the roof comes off. Win one of the two and KU fans will still be buzzing.

Stop me if you’ve heard this one: Iowa State will be the toughest test the Jayhawks have faced so far this season, and there’s a lot about this matchup that makes it look like an absolute dog fight is coming on Saturday.

But it’s hard to pick against the Jayhawks right now, especially with Memorial Stadium actually being a real homefield advantage and this offense rolling.

KU DB OJ Burroughs on how much better this KU Defense can get by KUsports.com

Kansas D-Lineman Eddie Wilson on the group as a whole & coming to KU from Buffalo by KUsports.com

KU TE Jared Casey on having fun in the Kansas offense by KUsports.com

I'm surprised that you think TCU would be a favorite even if KU beats ISU.

TCU will probably be crushed by OU as OU rebounds from last week, and TCU hasn't played anyone else very good.

I would think that if KU were 5-0 and playing at home, KU would be a slight favorite.

I agree with you, but if we win and TCU beats OU.... I think TCU would be the slight favorite. Today is all that matters, RCJH!

A+ on the last sentence. Enjoy the moment!

Some of the online books have odds for next week already and TCU is already favored. A lot can change based on how this week goes, but that was a lot of the reason for me saying that.

Going to be a test today.

Predictions are difficult. Nobody knows what will happen today. One play at a time. Rock Chalk!