Not ranked? Who cares? Not the Jayhawks. 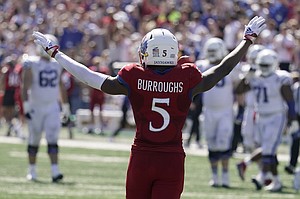 Here’s the thing about the 4-0 Kansas football team not being ranked in either the coaches poll or the Associated Press Top 25 on Sunday.

It doesn’t mean the polls are worthless or broken.

It doesn’t mean this Kansas team is not any good nor does it indicate that KU’s resume is devoid of quality wins.

It just means that there’s more work to be done.

And the guess here is that the KU players and coaches are 100% OK with that.

This is not a team that has reached this point by chasing glory.

Let’s face it; if that were the case, the daunting task of jump-starting the rebuilding process at Kansas might have seemed a little too overwhelming or unrealistic at the outset. Human nature’s a powerful thing.

Instead of trying to jump from the bottom to the top overnight, this group has gone about its climb by focusing on all of the right things. The opinion of pollsters, analyst’s predictions and the Las Vegas odds have nothing to do with the way they go about their business.

Sure, these guys are hungry for respect. But they know that the best and quickest way to be respected is to take care of business on Saturdays and show that they are worthy.

It’s never been about individual accolades or being in favor with the media. It’s always been about the work.

We know that because we’ve talked to the Kansas players and coaches about the past 16 months under Lance Leipold, and they’ve been open in sharing what they have prioritized.

That list includes: Hard work, a team-first mentality, locking in on the mantra of trying to improve by 1% each day and not worrying about what it says on the scoreboard or in the headlines.

It’s easy to say those things when you’re undefeated and one of the early feel-good stories of the college football season. But these guys were doing that stuff long before now. If they hadn’t been, now would never have arrived.

In Year 1 under Leipold, KU did its best to lay the foundation. And it was all about playing hard and trying to execute no matter what. Sometimes that was difficult and the overmatched Jayhawks simply could not find success. Still, they kept coming — quietly, consistently and methodically.

Other times, like in the late-season win at Texas or the two close-call losses that followed it, the Jayhawks discovered that their approach could work.

So they stuck with it. All offseason, as they added new faces and quietly targeted this type of success, they remained focused on the process that showed them that better days were ahead.

No one could have known that those better days would come this soon or be quite this good, but when you operate with your eyes fixed on improving for personal pride and the sake of those around you, that’s when special things can happen.

So, yeah, KU’s not ranked this week and there are a whole bunch of people out there who believe that’s some sort of outrageous injustice.

But I promise you these guys are not in that group.

They don’t concern themselves with things like that. Their focus today is the same as it was when the season started at 0-0 or when they took a 1-8 record and little hope into Austin, Texas, last season and won.

If it wasn’t, they never would have gotten here.

And for them it’s all about doing the work, believing in the process and letting the rest take care of itself.

So what if they’re 26th instead of 25th? And who cares if Iowa State opened as a 3.5-point favorite this week?

That had no bearing on Sunday’s practice plan or what the Jayhawks will do Monday through Friday.

Saturday is when it all will count, but even then their minds will be on perfect execution on the next snap or series and little else.

Matt, your message is perfect!

Ignore the rankings. Do what we do. Remain focused on building a Program that will last.

Not sure you can use a purposeful tanking of seasons phrase, to get high draft choices, to what is happening here.

If you would have left the Philly connection out, it might have connected.

Very good points. To me, though, the first major serious sign that a turnaround is in progress was the Oklahoma game. The Texas game was further affirmation of progress, despite the horrid blowout inbetween. My wife and I are thoroughly enjoying this season and are watching to see how we fare when we run the gauntlet starting this Saturday.

Good point. I'd imagine that OU game did wonders for their belief that they could compete with anybody.

Matt -
Good Article. On a side note – would be interesting to see of the KU starters or 2 deep how many were here when Coach Leipold got here and how many have transferred in. Wondering how much is much better coaching of previous recruits and making them better vs bringing in new guys.

We weren't ranked in the latest BEAUTY CONTEST...and that is definitely OK...because the judges are drunk on the past winners and a lot of them are paid to rank contestants in a certain way by the media,who have matchups coming up on their networks' TV schedule and they want to hype it.. so they can get as many eyeballs(ratings) as possible to tune in to their game...so like all BEAUTY CONTESTS...there is politics and things going on behind the scenes controlling the narrative...so if you are just looking at the surface you don't see or take into consideration...so don't worry about it..just keep focusing on improving everything you do... in every area of your life.. and let things fall into place naturally...there is a lot to improve if you want to be playing one of the FOOTBALL FACTORIES in January...but I BELIEVE YOU CAN!!! ...if you keep the BLINDERS ON and DON''T LET ANYONE OUT WORK YOU!!!...GOOD LUCK!!!

Brad- Who is getting paid to rank teams?

The media wants more eyeballs watching compelling stories, different teams that will bring more or new eyeballs to watch a game that they would have passed on before. We love to see the little guys win, compete.

The factories, interesting choice of words, play each other and are bigger draws when they do. The downside is that someone has to lose and that hurts their rankings. If the media wanted the Factories to stay highly ranked like you state, then why risk them dropping out of the ranks with 1 or 2 loss's playing each other? See Notre Dame.

Watching AL or OSU beat any team 65-3 is only interesting to their fans. Seeing KSU beat OU on the road, now that is something to watch and will get viewers tuning in. It is why the media alerts you that there is an upset in the making.

It is who you play and winning that gets you noticed and ranked. Not some backroom deal making.

I have to agree with Rodney. Where is the proof that they're paid to rank certain teams a certain way to get TV ratings? If Alabama was 4-0 and playing Texas A&M at 4-0... not going to be the premier matchup on gameday.

Rodney...I stand by my comment...it is the way it has been done for years...it is not my opinion...it is just the way it is.

If it is just you thinking out loud say that. Ok.

You said "a lot of them are paid to rank contestants in a certain way by the media, who have matchups coming up on their networks' TV schedule and they want to hype it".

You are alluding to a conspiracy. That is quite a reach to say that without anything to back it up. Or stand by. Or stand on your head.

It's not a conspiracy...it is just how business is done...I really do not care what you think about it...because it isn't an opinion...do your own research...if you want to call it conspiracy..go ahead...it just doesn't matter...and rankings do not matter until late in November.

I'm glad our players are hard workers regardless of where they are ranked.

But you better believe that these coaches and players love use slights like not being ranked yet and being underdogs at home as extra motivation. It's fun to be considered the best, but it lights a fire when other people still don't believe in you. We're gonna see a fired up KU squad again this Saturday and I love it!

“But they know that the best and quickest way to be respected is to take care of business on Saturdays and show that they are worthy.“

Glad you went on to emphasize that it is even more about Sunday through Friday prep. It just doesn’t show until Saturday.

Reminds me of your question (I think) to Lonnie Phelps yesterday. Where does the D go from here?

To the film room to identify our mistakes and correct them.

Maybe my favorite response ever.