Could ESPN's College Gameday be coming to Lawrence, Kansas next week? 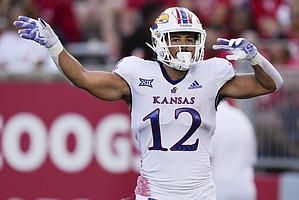 Kansas running back Torry Locklin celebrates after his touchdown during the first half of an NCAA college football game against Houston, Saturday, Sept. 17, 2022, in Houston. (AP Photo/Eric Christian Smith)

SUNDAY UPDATE, 11:15 a.m.: Gameday is not coming to Kansas this week. The ESPN showcase announced Sunday morning that it is headed to Tennessee for the Tennessee-Florida game next weekend.

So now that the Kansas football program has done the unthinkable and ripped off three straight wins to the start the 2022 season, it’s only natural to wonder what’s next.

From the fan perspective, wondering what’s next is tied directly to next week’s game against 3-0 Duke and questions about whether ESPN’s College Gameday might come to Lawrence to host its Saturday showcase and highlight the clash between basketball powers.

It’s one thing for fans to hope for that. After all, that’s what fans do. Get fired up, go overboard and spend a few seconds firing off a tweet tagging College Gameday.

They weren’t the only ones, though.

Those weren't the only one notable tweets.

“Lawrence, KS,” Goff began. “It will be magical next weekend.”

That likely will be true whether Gameday makes it to town or not. But if it does, therein adding to the significant buzz that already surrounds the program, you might see football fever in Lawrence like you’ve never seen it before.

The guess here is that the final word will come sometime Sunday.

A couple of people I checked with at KU on Saturday night, did not know yet and weren’t sure when they would.

From the looks of it, games between Florida and Tennessee and Clemson and Wake Forest are likely KU’s biggest competition to host Gameday next week.

But don’t underestimate ESPN latching on to the KU-Duke football/basketball angle and wanting to spend an entire day cheesing it up over that.

Either way, the mere fact that I wrote this and people are wondering is just another sign that Kansas football once again is headed in the right direction under second-year coach Lance Leipold and crew.

Kickoff for next Saturday’s battle of the unbeatens is slated for 11 a.m. on FS1.

And Goff already is asking fans to show up and be loud. Don't be surprised if they listen and don't be shocked if it's a sellout.

Jayhawk Nation, we NEED YOU at The Booth next Saturday vs. Duke.

Be early. Be loud. And let’s make a statement‼️ #PackTheBooth

The basketball team needs to be on the sideline in full force leading with the cheer team.

"Kickoff for next Saturday’s battle of the unbeatens is slated for 11 a.m. on FS1.

There's your answer to why ESPN will not do Gameday from Lawrence on Saturday. They aren't going to send the Gameday crew for a game not broadcast on ESPN. No way. No how.

They've done that before, including as recently as this month for the Texas-Alabama game. This obviously is no Texas-Alabama but they've definitely done non-ESPN games before.

I agree with David. The story line -- especially for ESPN -- is there for Duke and Kansas.

But an 11am start on FS1 likely isn't going to result in that.

Maybe if we're 4-0 against ISU next week?

Well, it was announced yesterday that Gameday would be in Knoxville, TN this Saturday.

knowing that it's not happening this weekend vs Duke, you could make a realistic argument for any of the next 3 games for KU being part of Gameday if both KU and their opponent keep winning, possible scenario(s):

Week 7 At Oklahoma both teams undefeated, KU (6-0) would definitely be ranked and OU (6-0) is probably top 5 if not higher by that point.