Kansas WR Lawrence Arnold's 3rd-down receptions vs. West Virginia were bigger than you might think 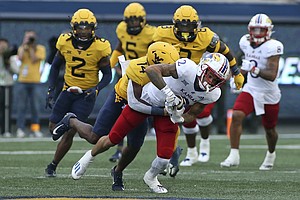 When programs are rebuilding, people constantly are on the lookout for signs of progress and concrete proof that things are getting better.

For the Kansas football team, the 2-0 start to the 2022 season is certainly one of those indicators, but an even bigger one showed up this week during the Jayhawks’ regularly schedule press conferences.

Offensive coordinator Andy Kotelnicki and fellow wideout Quentin Skinner were the others involved, and all three of them recounted the plays in nearly the exact same manner and for the exact same reason.

“There were a couple third down catches by Lawrence Arnold and he caught the ball, stuck his foot in the ground, got up field and got the first down,” Leipold said on Tuesday, when asked about the play of KU’s receivers thus far. “A year ago, we would’ve tried to outrun it to the corner and who knows if we get the first down. But they’ve taken the things that we’ve been driving home to them and that’s the part that I’m really proud of with that group.”

While those plays did not go down as game winners like Quentin Skinner’s touchdown catch in OT or Cobee Bryant’s pick-six that sealed the deal, they were indicative of a key part of KU’s rebuilding process.

Even Skinner praised Arnold for his plays, proving that this team’s understanding of what needs to be done and how to do it goes beyond each player simply trying to handle what’s asked of him.

“You saw Lawrence Arnold make a lot of great plays on third down, putting his foot forward, putting his head down and shoulders and covering up that football,” Skinner said when discussing KU’s recent success on third downs and without being asked specifically about Arnold or those plays.

Kotelnicki said Wednesday that the offense starts every meeting by discussing how one play or one moment in a game can be the play that makes the difference.

Arnold’s first down conversions were an example of that.

“You have to assume that every play that you’re playing will be the difference in the game,” Kotelnicki said. “Because you don’t know when it’s going to come up.”

KU’s second-year offensive coordinator also said that the growth he and the rest of the coaching staff have seen from the players in carrying out their assignments was at least partly derived from the coaches being more effective communicators in Year 2 compared to Year 1.

“We’re way better of explaining why we do things,” Kotelnicki said.

Beyond that, when things like Arnold’s conversions in the West Virginia game occur, the coaches make sure to emphasize that in their film sessions as much as any of the things that did not go right.

“It was caught underneath the sticks but he immediately got north and south and got the first down,” Kotelnicki said, giving his recollection of the play. “(When) we were in the meeting room, we pointed out that a year ago, that doesn’t happen.”

He continued by sharing the message they preach to their players.

“Here’s why we do these things: I know they’re mundane and they can be monotonous and you’re not going to want to do them and they’re not fun, but you’ve got to freaking do them because that’s how you improve. It doesn’t need to be complicated and sexy, just do them. Do them with good attitude and good effort and they’re going to start to show up in games.”

Bigger, faster, stronger is always the goal every year. And this team is gaining on that type of progress, as well.

But when you get three different Jayhawks’ pointing to the same part of a recent win at separate times, that’s when you realize that the alignment part of what’s happening with Kansas football is already on the right path.

The buy-in has been there for a while. Now, that commitment and the work that goes into it is starting to produce consistency.

KU already has done that twice so far this season and those victories did not come by accident.

KU WR Quentin Skinner on last week’s win & the emotions of it along with where Kansas goes from here by KUsports.com

In the past (decade), it seemed that so many drives ended a yard short of a first down or were stalled by a penalty. It has been so good to see the latter improved so much from day one and getting that extra yard as well. I think the latter was also pointed out in an article last fall about Jalon; that there were a couple plays where he lowered his shoulder to strain for a first down. Gotta move the sticks. While you’d rather not have your QBs taking hits, he is the leaders of the team and it’s good to lead by example as well as words.

It’s nice that Coach K also commented on his need to communicate effectively.

The Coach K stuff has to stop. It's ridiculous.

Calling him Coach K or writing about him?

Definitely not going to stop the latter. And the former is what the players call him. He's not the first non-Krzyzewski to use the initial.

“Coach K” isn’t something I was comfortable with personally, but it is important to recognize that is what the players say. They’re more important than my feelings.