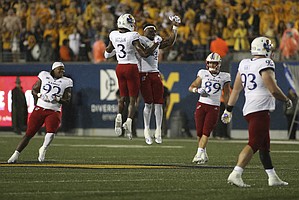 It’s amazing what winning can do in sports.

Laughed at and mocked for the better part of the last decade, the Kansas football program is getting some serious love after its 2-0 start to the 2022 season.

I supposed that’s what happens when the bar is so low and people have grown accustomed to writing you off before the season even begins.

No one’s writing off this Kansas team, however. At least not yet.

In fact, the Jayhawks are receiving a fair amount of attention from some places you just don’t expect them to receive it.

The biggest? CBS Sports’ Dennis Dodd put KU QB Jalon Daniels third on his list of Heisman Hype, which tracks the best players in college football throughout the season.

It’s a little tongue and cheek right now. And everyone knows that the Heisman is not handed out after two games. Or even six or 10. But Daniels’ numbers have been really good and the wins allowed Dodd to put him on his list without it being a total joke.

Daniels will have to do a lot to stay on the list, but he’s currently right in the thick of it, one spot ahead of 2021 Heisman Trophy winner Bryce Young, of Alabama, by the way.

Asked Tuesday about the recognition and early for his players and team, KU coach Lance Leipold said he appreciated the love but was not putting too much stock in it.

“Some of those numbers, yeah, they’re exciting," he said. "If we’re talking like that in Week 10, 11 and 12 then I might have better answers (about the honors)."

That’s not where the fun stopped, though. Far from it.

Daniels also was named to the Davey O’Brien Award’s Great 8 List for Week 2, as one of the top eight QBs in college football, and was one of eight players named to the Manning Award’s Stars of the Week list.

The O'Brien Award even went as far as to add Daniels to their Midseason Watch List. Quick reminder: It's still just Week 3.

In addition to that recognition, college football broadcaster Kirk Herbstreit listed Kansas as one of his seven top performing teams in the country for Week 2 and there was all kinds of the love for the monster numbers this Kansas offense has put up so far.

The 55.5 points per game is the best in the FBS, as is the team's 73.9% conversion rating on third down. The zero sacks allowed through two games is tied for tops nationally and the Jayhawks' 10 rushing touchdowns thus far puts them in a tie for third.

Leipold said Tuesday that the sudden offensive explosion enjoyed by the Jayhawks had not changed his team's overall philosophy on how to approach a game.

Then there’s the other side of the ball, where KU cornerback Cobee Bryant became the second Jayhawk in a row to receive the Big 12 Defensive Player of the Week honor.

In Week 1, it was Lonnie Phelps Jr., who had a monster game against Tennessee Tech in his KU debut. In Week 2, it was Bryant, whose pick-six in overtime sealed the road win for Kansas at West Virginia.

It marks the first time in Big 12 history that KU had a player win DPOW honors in back-to-back weeks and it’s worth noting that the Jayhawks’ defense has not even been their strongest unit to date.

Adding to these honors will get harder as the season rolls along — starting this weekend with the 3 p.m. kickoff at Houston on Saturday.

But this is a confident team right now and the Jayhawks already have seen validation of the work they’ve put in in the form of two victories in two tries.

Whether the awards keep coming or not, this group likely won’t care as long as it continues to compete and possibly piles up a couple of more wins along the way.

Houston (1-1) opened as an 8-point favorite over the Jayhawks this week, and the line quickly moved to Houston -10 or 10.5 in most places.

For the second week in a row, the Jayhawks (2-0) appear to be headed into battle as a double-digit underdog.

Cobee...if you read this....you are young and still have a lot of things to improve....so lock in and get focused...do not let the award go to your head....to be honest...you aren't that good yet...but if you work extremely hard...you WILL be!

What a great feeling to be getting the right kind of attention after two games. Congratulations JD, Cobee & Lonnie on your awards. Go show Houston that KU is a program to be reckoned with.

The change in the spread is about the perception of the betting public vs actual analysis of performance. Vegas wants people to be almost as likely to bet one way as another, so if too many people are willing to give up 8 pts and still taking Houston then the number gets adjusted to encourage more people to bet on KU. The line is about avoiding big losses, and the change reflects the lingering effect of past decade.

I was listening to one Big12 podcast, and even though they had already talked multiple times about KU being better than in the past (and predicting 4+Ws), there was still a knee jerk reaction of including KU in a list of gimmie games. They quickly caught themselves, but the initial reaction showed the long ingrained perception.

Cupcakes aren’t going to change perceptions and neither are isolated games. Gotta keep stacking together day upon day and game upon game. It’s gotta be the culture vs an event, which is the core of this staff and program.

They don’t give out awards for offseason conditioning or 2-games into the season. Excited that they get to continue to play the games and change perceptions.

Dirk how are you using COTY?

- Coach of the Year

- Color of the Year

- Contractor of the Year

- Cadet of the Year (various organizations)

- Communicator of the Year (various locations)

Question - Does Cobee get the award if he just kneels down?

Look folks, I love the fact that we're getting attention. But we still have no idea if this team is going to end up Bowl Eligible. I think it's fun because we're 2-0. At 4-0 I'd feel differently.

I'd also argue after the WVU win we're not going to sneak up on anyone anymore. We could go down to Houston and get smoked. Or lose by a FG. Point is a loss is a loss. A win is a win.

We're clearly a better team than we've been. But I won't feel accomplished until this team makes the post season. My guess is that's how the coaching staff and players are as well.

Rodney - Do I really need to spell it out for you? Seems so contrary to the brilliance of your past comments, guidance, tutorials.

I will admit those are very creative options.

Thanks for the brilliance mention but I put my pants on the same way as you. I think.