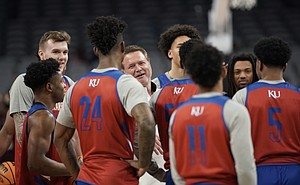 Kansas head coach Bill Self talks with his players at half court on Wednesday, March 16, 2022 at Dickies Arena in Fort Worth, Texas. by Nick Krug

Monday brought the start of another year of boot camp for the Kansas basketball program and KU coach Bill Self’s favorite part about Day 1 was simple.

“We got through it,” Self told the Journal-World.

Typically known as one of the toughest training sessions of the season, the two-week boot camp stretch features KU’s coaches pushing the Jayhawks through dozens of mentally and physically exhausting drills.

Nearly all of them take place without a ball and each is designed to improve the team’s overall conditioning through skills that will translate to the court when practice and the season begins. As you might expect, there’s a particular commitment to drills that fine-tune KU’s defense.

Self said the start of this year’s boot camp session was “just OK, not the best,” but, to some degree that was expected.

The 2022-23 Kansas team features a handful of new faces and first-timers, and the adjustment to boot camp, no matter how prepared a player thinks he is, is always difficult.

It starts bright and early, usually around or before 6 a.m. or 7 a.m., and the anticipation and is among the biggest challenges.

Kansas Athletics recently posted a short video of KU assistant Jeremy Case grilling freshman Gradey Dick about whether or not he was ready for boot camp. The video featured Case laughing and smiling throughout the exchange.

“Back in the day it was hard,” Case said. “When we used to really get after it.”

Don’t let Case fool you. These young guys do, too. And the duration of boot camp is often tied to how hard they work, with Self showing a willingness to cut it a day or two short if they put in the kind of work that leads to his generosity.

Each year, boot camp marks the unofficial beginning of another college hoops season at Kansas. The next key date is about a month away, with the defending national champions hosting their first official practice in early October, followed by the annual Late Night in The Phog on Oct. 14.

Here’s a quick look at some of the sights and sounds from Day 1 of boot camp 2022.

sliding back into your feed with some 🏀 pic.twitter.com/RKQew0wLkp

checking if @gradey_dick is ready for Boot Camp...

So nice that this isn’t an anticipated relief.