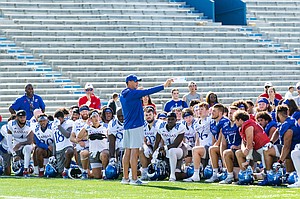 Kansas coach Lance Leipold addresses his team at the end of practice at David Booth Kansas Memorial Stadium on Aug. 20, 2022. by Chance Parker/Journal-World

There have been 12 season opening home football games at the University of Kansas since Mark Mangino left town and the attendance at each one told some kind of story.

That includes the 2020 opener, which hosted no fans because of the COVID-19 pandemic.

Friday night, as the Jayhawks take the field for season opener No. 13 of the post-Mangino era — lucky 13? — Kansas fans will have the opportunity to make the biggest statement yet about the state of this football program and the direction they want it to go.

All they have to do to make it is show up to David Booth Kansas Memorial Stadium for the 2022 opener against Tennessee Tech.

And don’t think for a second that people won’t be watching. Whether you’re talking future conference affiliation or the hopes and dreams of a stadium project that’s woefully overdue, the stakes are as high for those in the stands and in the suites as they are for the players and coaches on the field.

In case you’ve forgotten, this place does know how to show up for football games. But it’s more important now than it’s ever been.

The first four season openers that came after Mangino’s departure attracted attendance numbers north of 40,000, including a high of 48,417 fans for Turner Gill’s first game in 2010 and the 46,601 fans who came out to see Charlie Weis take the field for the first time as a Jayhawk in 2012.

Sure, those seasons were still close enough to the program’s glory days under Mangino for apathy, aggravation and downright anger to not have entered the picture yet.

But neither of those crowds had the backing of the vibe that currently surrounds the program to entice them to come out.

In 2010, no one knew what was coming and going to football games at Memorial Stadium was still considered cool and something KU fans did without giving it a second thought.

In 2012, the pain of the failed Gill experiment was gone and the big-name coach with his Super Bowl rings and Tom Brady ties was enough to get that crowd excited. Even then, no one quite knew what was coming.

That led to the stretch between 2015 (David Beaty’s first year) and 2021 (Lance Leipold’s first year) where the average attendance for the home opener dropped to 29,026, including a crowd of 26,103 last season.

It’s hard to blame anyone for contributing to the number being nearly cut in half since the final three years under Mangino, who inspired an average 50,486 to come out for the three season openers from 2007 to 2009.

But for the first time since then, there is a sincere feeling of optimism around the program again, and it’s not one that is rooted in hope. It’s based on tangible evidence of something solid and sustainable being built and backed by a strong finish to 2021 that was unlike any KU fans had seen in years.

KU running back Devin Neal, a Lawrence native, mentioned it to me the other day in the simplest terms. Neal said he feels like people are “curious” again. And he added that it was a great feeling to be in control of providing the answer to that curiosity.

“There’s a different aura surrounding the building, surrounding the city almost,” Neal said. “I think people want to support us so bad and they’re so curious to see what we can do this year. I think all of the work that we’ve done so far is leading up to this moment.”

The players have done their part to get to this point. But they can’t go it alone. The only way Kansas football becomes relevant again is if everyone joins together, from the stands to the sideline, to push this thing forward.

It won’t happen quickly. It won’t come easy. And it will be uncomfortable at times.

But others are watching. And if they don’t see something worth remembering, that could be bad news for the program in ways far worse than what shows up on the scoreboard.

I get it; Kansas football fans need something worth cheering for and should not be held responsible for the hard times of the past decade.

But the past is irrelevant now. College football is entering a completely new era and KU needs both its football program and its fan base buzzing to remain relevant in the sport.

That part we’ve seen before, but maybe not quite like this.

Driving in from Dallas, TX to show support. Challenge is on regarding longest distance travelled to attend the game. Enjoy!

Good encouragement article Matt. Hopefully it does motivate more people to go to the Booth.

That being said, the past is just as relevant now as it was in Turner’s first year. If you go back a few more years, I think you will find plenty of evidence to support that for Mangino as well. Or better yet, look at attendance during the Mason years, or anytime a coach has turned a program around. I call it fan inertia. It always takes a year or three for fan support to match team performance. It works in both directions too, which is why Nebraska still has sell outs. There’s generations of inertia there.

I remember comments when Coach Tiller brought basketball on grass to Purdue and Drew Brees started leading the team towards the Rose Bowl. Fans weren’t filling the stands commensurate with the level of play on the field. Good or bad, the past has an effect on the plans fans make for Saturdays in the fall.

I’m excited for the direction the program is headed, and wish I could be there, but I’ll be pleasantly surprised by 30k.

All very well said. And you're not wrong. I suppose the hope attached to it this time feels different than the blind hope of the past because of those tangible improvements we've already seen. You're right, though. That needs to translate to the scoreboard at some point.

As you can see in the list above, they need to get to 32,612 or more on Friday night to have the largest opening-night crowd since 2014. I think that's doable. And that will be fairly significant in and of itself.

Matt, I do agree that the past must be put squarely where it belongs, in the rearview. I'm not predicting a number for Friday (holiday weekend doesn't help because a decent number of students go home - which is a whole other discussion), but people do need to do their part and show up. It isn't fair to criticize KU fans for not supporting this program over the past three coaches, they were all awful. But it is fair to criticize them if they don't show up this year because, if they don't, then they have not been paying attention to what is going on with the program. And they need to, if they want stay relevant in athletics.

Side not on attendance, for the Weis opener, remember too that he had brought not one, but two 5-star rated QB's into the fold before the first game. I remember the stadium cheer when Crist was announced on the scoreboard as the starter. And man did it go south fast from there.

Congrats to Coach L on the extension he signed for $3.5.

Brett - Good recollection on the CW QBs. I had forgotten all about them.

Labor Day could work against us if the students leave as soon as school is out. It could also work to our advantage that it is a Friday game, so they can stay through the evening for the game and still have the holiday weekend. The holiday might also help to bring more fans.

Unfortunately, when it comes to many of the fans needed to fill the stadium, they really aren’t paying attention. They can grasp 5*, but little more. That’s why it takes time. Lance preaches to the team a little better everyday. I’m guessing he will make similar comments regarding the fans. Thank the ones that show up and challenge more to fill the Booth. It’s why he wins.

Are there local HS games tonight?