Thanks to football buzz, Kansas basketball coach Bill Self sensing Lawrence as the 'cool place to be' 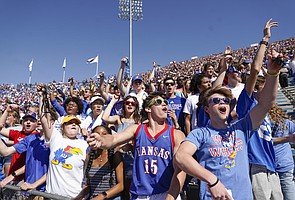 Kansas fans in the student section go wild during the kickoff in the first quarter against Iowa State on Saturday, Oct. 1, 2022 at Memorial Stadium. by Nick Krug

Kansas basketball coach Bill Self knows that his teams have been responsible for bringing some serious parties to Lawrence over the years.

He just wasn’t ever there to see them, always celebrating with his team at whatever site or venue the Jayhawks picked up their biggest wins, most notably Elite Eight games, Final Four wins and the 2008 and 2022 national championships.

Today, it’s the 5-0 Kansas football team that currently has Lawrence in party mode, and Self has been around to soak it up. He rather seems to like it, too.

“This is the most juiced I’ve seen Lawrence since I’ve been here,” Self said this week in an interview with Nicole Auerbach and Kris Budden for SiriusXM’s College Sports Talk. “I wasn’t around when we won the national championships, and I know it was juiced then, but this is fun. I mean, it’s become kind of the cool place to be.”

That’s not just for Kansas fans either.

ESPN’s College Gameday is coming to Lawrence for Saturdays 3-hour preview show and it will mark the first time the showcase television event has been in town for a football game.

Beyond that, KU is riding three consecutive sellouts and interest in the program — both locally and beyond — seems to be growing by the day. Self has seen that up close and personal and he believes it has made KU sort of the center of the college sports world at the moment.

The fact that his own team is one week away from hosting its annual Late Night in the Phog season tipoff event as the defending national champs (6 p.m. Friday, Oct. 14) certainly adds to that. But, at least right now, most of the buzz is on KU’s football program.

“People that don’t have tickets are still coming to hang out, still coming to tailgate, be on the hill,” Self added in the recent interview. “I’m sure businesses are booming compared to past autumns, especially Saturdays. The economy feels like it’s doing well. But the interest level (is way up), and you can just tell by just day to day walking through the hallways.”

While Saturday’s Gameday appearance will be essentially one giant promotional piece for the KU football program and Lawrence in general, you can bet at least part of it will mention Self and the Kansas basketball program.

It wouldn’t shock me to see Self stop by the Gameday set between 8 and 11 a.m. on Saturday morning. And sprinkled in among all of those live shots of all of those people on Campanile hill surely will be some images of Allen Fieldhouse and a nod to KU’s rich basketball tradition as well.

Self — like countless others — has talked for years about how much of a lift a good football program and excitement on Saturdays can give a university.

He’s now seeing it firsthand for the first time in a long time, and he appears to be loving every second of it.

“There’s a good energy here that makes this place a kind of a fun place to be a part of right now,” he said in the SiriusXM interview.

And with the Gameday bus expected to pull into town around 2 p.m. today, it sure looks like it’s going to be a wild 48 hours in Lawrence, Kansas.

Ah, the pleasure of being a two-sport school. Now let's see if the football team can find some more wins somewhere in these last seven games.

Matt, I trust you will keep us up to date on the plans for GameDay as you figure them out. Especially, the location in which they are going to set up at. I gotta stop by and see that circus!

Winning is a great deodorant isnt it !

LOL I love it!

Matt...Still waiting for an in depth Mark Mangino interview...long overdue!