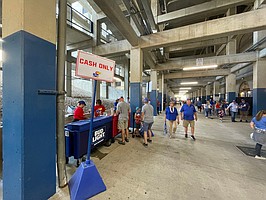 One of the new cash-only concession stands located in the outer concourse area at David Booth Kansas Memorial Stadium is shown here about an hour before KU's recent home game against Iowa State on Saturday, Oct. 1, 2022. by Matt Tait

It may be hard to believe, but it was just one week ago when issues with KU’s concessions stands at a jam-packed David Booth Kansas Memorial Stadium were just as big of a topic among KU fans as the Jayhawks’ red-hot start to the season.

The Jayhawks’ remained hot over the weekend and there was a favorable response from fans to the improvements KU made to address the concessions issues during the second sold-out game of the season.

As a result, the Jayhawks’ national ranking, 5-0 record and an upcoming visit from ESPN’s College Gameday are all far bigger topics today than the stadium’s concession stand issues.

I didn’t see it for myself. But there were plenty of people willing to share their opinion of how things went in Week 5 compared to the mess they encountered just one week earlier.

For what it’s worth, I did take a couple of laps around the stadium concourses during the pregame last Saturday, both to see how packed it was and to see where they put the new points of sale, and things looked pretty calm then.

It sounds like it stayed that way in most areas. It’s important to note that nobody said it was perfect and it looks like there were still a few issues. But the response was pretty positive, and it’s clear that KU fans appreciated the efforts the KU administration made to try to make KU’s concessions stands operate as quickly and pain-free as possible in an imperfect venue.

Today, the most popular complaint seems to be with how poor the cell phone service is during games at DBKMS, but that seems to be as much an issue with Verizon, T-Mobile and others as it is a KU problem.

Here’s a look at some of the concession-stand feedback I received from fans who were there for KU’s 14-11 win over Iowa State:

1,000% better. Hats off to KU for flipping that around that quick. Still room to get better but that was great to see.

Everything seemed much more organized. They should expect many more in the lines for this Saturday due to the early start time. They won’t do it with a remodel in the near future but more TVs to watch on every level so you can watch while you wait.

Tremendous improvement. Kudos to KU Athletics. I couldn’t get a beer last week. Yesterday I had a two minute wait at one of the many “cash only” stands. Nice work!

It was fine. I think they’ve adjusted as much as the facilities will allow.

Pretty well, tbh. My beer wait was dropped from 39 minutes vs. Duke to around 4 minutes vs. ISU. A night/day difference many folks (including you) suggested would be impossible without a new stadium.

Best they could for the space they have to work with. Just shows how bad the new stadium is needed.

Easy this week 2 mins before half no wait and 35 mins before the game!!! Upper level between 3/4.

Cash only stations was great.

Sooo much better. I didn’t see any Hawkers in my part of the family zone. I’m sure there is a reason, but doesn’t it make more sense to put the port-a-potties on the outside concourse and move the new cash only beer lines inside?

At some point we are limited by the space at the stadium but it was probably about as good as we can make it at this point. Kudos to @KUAthletics for listening to the fans and taking action

Complete transformation. The longest line I was in lasted maybe 5 minutes. Also it was easy to walk around without having to weave through lines. @KUAthletics responded well to feedback. #kufball

A breeze! The concessions on the outer concourse were great too. My 3 year old gave two thumbs up for the Kona Ice Truck.

It was a significant improvement. For one of the concession lines they added ropes and had one line and then the front person went to the next open register, it was significantly quicker. I saw Booker in the crowd taking things in as well.

I was way better but still not great...the "hawkers" we're just down on bottom level thought theyd be walking stadium. But lines were bearable. Could still improve for sure though

Loved having cash only lines. (And I thought they were very well marked). Only waited 2 minutes for a beer pre-game.

Best I have experienced. Lots of beer spots around the outer concourse which is all we were looking for.

Water refill stations were great, the side stands from local resteraunts always had short lines. The concession lines were a little long, but my mom and brother stood in them and they didn't take too long. Didn't see anyone beer hawking the stands

What did those who were not there saying???

Concessions were10X better. But they still ran out of Modelo (upper concourse at section 7-8). And I never saw a single beer and peanut guy running around. Those are nitpicks not complaints. Had a great game day experience! The efforts/changes made by the KUAD are much appreciated!

Thanks for the follow up Matt. I wasn’t there so there’s no direct effect for me, but it is still encouraging. IMO, it shows that the AD is responsive and adapting to the changing situation. I would have been impressed if they were able to pull it off with a road game or by-week in between home games. Seems like another great turnaround to me.

One thought on the cash lines i saw that someone had contributed elsewhere is to round off all prices to whole dollars and build in sales tax so that no coinage is used to speed up each transaction.