As Kansas football heads into its bye week, one thing is clear — the Jayhawks need their QB back 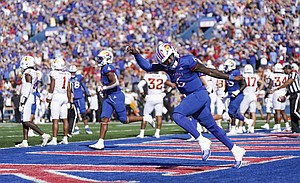 Kansas quarterback Jalon Daniels (6) celebrates his touchdown during the second quarter on Saturday, Oct. 1, 2022 at Memorial Stadium. by Nick Krug

Two things can be true when looking at KU’s quarterback play since Daniels was injured late in the first half of the Jayhawks’ loss to TCU on Oct. 8.

In fact, it’s actually pretty easy to say that Bean has been solid in relief of Daniels and that the Jayhawks have missed their quarterback, as well.

There’s no telling if Kansas would have won any of the three games it lost with Bean in there instead of Daniels. But it’s not a criticism of Bean if you say that KU needs Daniels back.

Yes, Daniels’ numbers and overall production were better than Bean’s, especially as a runner, as strange as that sounds. But the reason KU has missed JD6 goes far beyond statistics.

Daniels is a natural born leader with charisma for days. He’s easy to follow, even easier to fight for and the kind of player who tends to make everyone feel a little more comfortable and play a little better just by being out there with them.

Tom Brady he is not, so we’re not going to spend the rest of this column talking up Daniels like he’s some kind of GOAT. But his confidence and swagger is infectious, and Kansas has been sorely missing both in the two and a half games it has played without him.

This is not a matter of preparation or talk. The KU players and coaches all have said the right things about Jason Bean during the past two weeks. And there’s no doubt in my mind that they’ve believed the words they’ve said.

This team genuinely thinks that Bean is good enough to help them win games. And he might be. So far, though, that hasn’t happened.

And that’s why Kansas needs Daniels back as long as he can get healthy enough to play his game and be the player he was for the first five games of the season.

With Daniels, it’s all about feel. He made plays when there were none there to be made. He picked up yardage and made throws that others might not have even tried. And he did it all with a million-dollar smile and the type of swagger that few players have as naturally as he does.

The confidence and celebrations never seemed forced with him because they were built on raw emotion and genuine joy. Daniels is not Russell Wilson, carefully trying to craft a narrative about who he is as a player and then hoping he can go out and match it with his play.

Daniels just plays. And, for the most part, he lets his numbers and production speak for him.

Bean tries to do the same thing, and the less he thinks about what he’s doing and just operates on instinct the more it looks natural for him, too.

But the two KU QBs are not similar players. They may have similar skill sets and Lance Leipold and Andy Kotelnicki may be able to ask them to execute the same plays.

But when it comes down to actually doing it, the difference is clear. With one QB, KU fans expect the plays to be made. With the other, they hope he can make them.

That’s why the Jayhawks need their QB back.

Did we see Daniels on the sideline in uniform Saturday? I recall someone on this message board said last week that they had heard that JD took some reps on Wed so maybe he's getting close. The bye week is coming at a good time for his recuperation. Of the games we have left I think Texas looks the most winable with TT (away) a close second. I think we are a year away from being able to beat KSU.

Losing Daniels is losing two players. Losing the infectious leader and an additional, punishing runner who will drive for every last yard (which just might be the game winner).

Bean is good! But in a tough league we need everything!

We have a young team, thin in numbers in a tough league. Absolutely no wiggle room. Let's hope that the off week produces healed bodies. And remember, too, a PROGRAM isn't built in a single year. We are off to an awfully good start. But give us our players back.

Yesterday we also were missing Grimm.

I've said all along that losing Daniels is the key reason we're sputtering out. That and our run defense isn't all that good to begin with.

And Bean has been solid if not better than that. But Daniels is dynamic when he's right, and we're absolutely missing that from the equation.

Didn't Bean execute a couple of long, impressive drives in the second half on Saturday?

Nothing against Daniels, though he was absolutely average the last game-and-a-half that he played, but that is not the problem. The problem continues to be soft defense and a team ill-prepared at the start of almost every game they play.

Also, I'm not sure Bean is always aware of where he is, physically, in relation to the sticks. I cannot forget him sliding on 3rd down, less than a yard short of the first down and with him having enough time to reach the sticks before the defenders could reach him. Had to punt after that. And also the several times he threw short when he had receivers wide open way down field, sometimes practically at the goal line. He just doesn't have the overall vision needed.

I can't speak to the other injuries, but it certainly didn't look like anything was dirty about Jalon's injury.

To me it looked, on the replay, like he could have easily avoided landing his full body weight on Daniels but chose to land as hard as possible.

The defense is KU's biggest liability, and it has a lot more to do with KU's last three losses than who is under center at QB. The Jayhawks' five wins have all come in spite of their defense. In three of the victories, the KU defense nearly lost it (WVU, Duke, ISU). KU's record could easily be 2-6 instead of 5-3 because the defense is so porous.

No argument. But defense is part of building a program. Phelps is missed. Miller, Logan solid. We need more, but have what we have. We need to trust Leipold to adjust. Bye week this year, then next year with recruits and transfers. Some patience, too.

All this talk about bad defensive play.....

But, the last 2 games, the defensive units have seen more plays than the the offensive units.

Don't know why Sevion Morrison & Ky Thomas are not able to pick up the slack in Daniel Hishaw absence.

B1G supposedly is a FAR superior league than Big XII. Yet, ORIGINAL Big XII recruited RB's seem to be able to absorb the Big XII Defensive pounding vs. the transferred B1G RB's.

The first 5 games were set up for the team's success early. But Jalon struggled as the quality of opponent was better, as has the rest of the team. Truly good teams and players learn and get better as the season progresses. We'll find out a lot about this team and coaching staff in the next few games. The future (I believe) is bright, but they'll have to go through the dark tunnel of adversity to get there.

I expect some improvement but also am trying to remember we have exceeded expected wins already and we don't really have enough deep talent to win much more given the schedule. But I do agree there should be some improvement during the remainder of the season. It just may not translate to wins. The competitiveness and playing to the end are good signs.

I agree, Dale, but with this coaching staff I expect them to win at least one more game. The culture has been established. Part of that culture (I expect) is adapting and overcoming adversity.

Yet in JD's last 6 quarters his offense produced a total of 17 points. I think we're missing the fact that the talent level on the defense we're facing has gone up significantly. I think Bean has a stronger arm, although he needs to soften up throws sometimes as too many have been intercepted or batted down that could have been avoided with a touch more "lob" on the throw. He also locks into his primary receiver too often and telegraphs his throw.

I'm not so sure about the stronger arm. Back when Daniels committed I watched a video of him throwing a football on an empty field and that ball sailed (no wind) 70 yards. Yes, he was throwing as hard as he could (senior in high school) and probably not trying to pinpoint it but the strength of his arm was obvious. I doubt Bean could make that throw although he does have a strong arm.

Daniels is clearly better all-around than Bean and Jalon is also smarter. Bean has slid before getting the first down on 3rd downs several times. Bean has thrown some really bad passes, and has missed receivers because he doesn't put enough air under it. We lost to TCU by 7, critical INT thrown on a really bad decision by Bean. Yes, Jalon fumbled it in the first half at the 1 which was also a missed opportunity. The fumble is more excusable than throwing the ball right to a defender deep in our own end. And Bean has also ran out of bounds for losses when he could have gotten rid of the ball without a penalty. Bean is also not as tough as a runner and usually goes down on first contact. He isn't that agile, or at least doesn't show it on game days. Jalon is tougher, more agile, has a stronger arm, and makes better decisions than Bean. That is why were 5-0. After Jalon went down, we lost every game.