With Kansas now bowl eligible, here's a quick look at the Big 12's bowl tie-ins for 2022 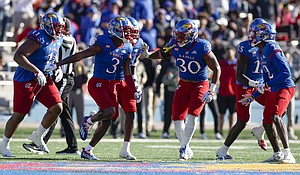 The Kansas defense celebrates an interception by Kansas cornerback Ra'Mello Dotson (3) during the first quarter on Saturday, Nov. 5, 2022 at Memorial Stadium. by Nick Krug

Thanks to Saturday’s 37-16 win over 18th-ranked Oklahoma State, the Kansas football team and its fans no longer have to wonder if the Jayhawks will end their bowl drought this season.

It’s happening. With six wins in nine games and three more chances to add to their win total before the end of the regular season, the Jayhawks are going bowling again this winter.

Here’s a quick look at their options and what we know about the Big 12 bowl tie-ins, some of which are set in stone and determined solely on how the final conference standings shake out.

According to a Big 12 news release this summer regarding bowl tie-ins for the 2022 season, the Big 12’s bowl partners will have their pick of all Big 12 teams with a .500 record or better for the upcoming postseason after the College Football Playoff selections are made.

The following is the order in which the bowls get to make their selections, with the bowl listed first getting the first choice and so on down the line.

All bowl game matchups will be announced on ESPN on Dec. 4, starting at 11 a.m.

As of today, six Big 12 teams already have reached the six-win mark that guarantees bowl eligibility.

Oklahoma is one win away at 5-4, Texas Tech and Iowa State are both two wins away at 4-5 and West Virginia, at 3-6, needs to win out to make it to a bowl game.

If more than eight Big 12 teams are eligible for play in the postseason, other second-tier tie-ins come into play.

One other interesting note regarding bowl games and the 2022 Jayhawks: It’s still possible for 11 of the 12 teams on KU’s 2022 schedule to become bowl eligible.

Two teams are one win away — Oklahoma and Houston.

One team is three wins away – West Virginia.

Those numbers, and the potential for 92% of KU's schedule to be bowl eligible by season's end, merely underscores how good the Jayhawks have been this season and how impressive this turnaround has been under Lance Leipold.

I saw a Tweet (I think from Kansas Athletics) that noted that KU was the first team in Power 5 history to lose by 50 points or more to two teams in one season (Iowa State and Oklahoma State in 2021) and beat them both the following season.

In addition, The Athletic's Max Olson pointed out that, entering today, only two Power 5 programs had not made a bowl game since 2017 — Kansas and Nebraska. The Jayhawks will no longer be on that list, and the Cornhuskers, under interim coach Mickey Joseph, sit at 3-6 with three games to play.

Would think we would end up in 4-6 range with Texas Bowl, Liberty Bowl or Guaranteed Rate Bowl, with the Liberty Bowl being my guess. From what I understand of the SEC tie-ins, they select based on the closest to the venue. I saw in one projection KU vs. Mizzery, but Mizzery would have to win 2/3 against Tennessee, NM State and Arkansas - doesn't seem likely. Kentucky? Arkansas?

Matt - Looking at Leipold's initial contract, seems like he is up for $200-400k in bonuses. Where there any changes to his bonus structure with the extension? Do his assistant coaches get any similar bonuses?

The assistants deserve bonuses. Leipold directs the traffic and sets the tone. The assistants see that it gets done as well as have big time input to Leipold.

The fact that NU is now the last team to not have made a bowl since 2017 makes this even sweeter.

The only thing better than that would be if it were Misuse who hadn't made a bowl game since then.

I selfishly hope they end up in Texas, but of course it's awesome that they are going to be getting a December game regardless of where.

Jonathan - Nice pick up on the lyrics!

It will be interesting to see the perceptions of our program once the bowls start bidding. Ultimately, the bowl committees want to see as many enthusiastic fans as possible in their communities for the events.

Early in the season, the change in betting lines indicated that the general public perception of the program wasn’t good. The fact that at 3-0, we were able to sell out the Booth, and for successive weeks after that, would seem to show that KU football want to be enthusiastic just like the BB fans. (Unfortunately, they aren’t necessarily the same.) The fact that after 3 straight Ls, we were still close to a sellout should also be encouraging to them.

It shouldn’t hurt that nationally, we’re arguably the biggest turnaround and a built in story on top of anything the bowl would inherently offer. Is it another week or so before the committees start showing up for games? UT is the only remaining home game.

We should all be Horned Frog fans for the next three weeks. If they win out, they will be in the CFP and that alone moves KU up at least one slot in the bowl pecking order. Let's also hope KU also wins out and finds themselves in the Sugar, Alamo or Cheez-It Bowls where the payouts are big. While I'm happy that KU will be in a bowl game for sure, I'd rather it not be the First Responder's Bowl, which has the lowest payout of any of the Big 12 affiliations, by far.

KU fans are going to travel to any of the bowl games because enthusiasm is high. Plus, KU is the college football season's best story by far, so they should be in high demand, particularly if they win a couple more games.