Jayhawks jump to No. 3 in latest AP hoops poll

Kansas forward Jalen Wilson (10) celebrates a three against Southern Utah during the first half, Friday, Nov. 18, 2022 at Allen Fieldhouse. by Nick Krug

The Kansas basketball team’s ability to remain unbeaten during a week that saw perennial contenders Duke, Gonzaga, Baylor and UCLA all lose was enough for the Jayhawks to jump into the top three in this week’s Associated Press Top 25.

KU’s week included wins over No. 7 Duke at the Champions Classic and a tough home win over Southern Utah.

Jalen Wilson continued to lead the way in both games for the Jayhawks, setting career-high scoring totals in each, first with 25 against Duke and then with 33 in the win over SUU.

North Carolina (4-0) held onto its top spot and received 47 of the 63 first-place votes. Houston (4-0) also stayed unbeaten and jumped into the No. 2 spot.

Texas, which throttled Gonzaga in its only loss to date, jumped seven spots from No. 11 to No. 4 and Virginia, which has roared out to a 4-0 start with Top 25 wins over Baylor and Illinois, jumped 11 spots from No. 16 to No. 5 in this week’s poll. The Cavaliers also received one first-place vote. Texas, meanwhile, received five votes at No. 1.

Gonzaga, Baylor, Duke, Arkansas and Creighton rounded out this week’s Top 10, and the Big 12 Conference as a whole had six teams mentioned in this week’s poll — four ranked and two more receiving votes.

Texas Tech jumped up two spots to No. 21 and TCU and West Virginia each landed in the others receiving votes category.

Kansas is headed to the Bahamas this week and will open play in the Battle 4 Atlantis tournament against North Carolina State at 11 a.m. Wednesday on ESPN. 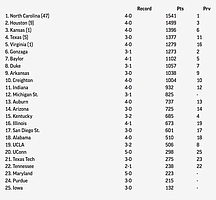 Matt, congrats on the Baby Girl! Now that you're back, can somebody fix the incorrect banner on the website showing wrong time for Saturday's football game?

Got it. Thanks for the kind words!!!