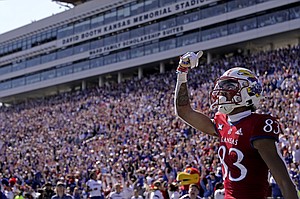 Kansas football coach, Lance Leipold, and his wife, Kelly, are doing everything in their power to make sure David Booth Kansas Memorial Stadium is as full as possible this weekend for the Jayhawks’ home finale against Texas.

Already the benefactors of three sellouts this season, the Jayhawks have responded well to playing in front of a full stadium.

Kansas is 4-1 at home this season, with the lone loss coming all the way back on Oct. 8, by 7 points to TCU. The Horned Frogs are still unbeaten and firmly in the middle of the hunt for both a Big 12 title and a spot in the College Football Playoff.

The Leipolds’ push for another large crowd started simple enough last Sunday, with KU’s coach tweeting a photo of a full Memorial Stadium with the words Pack the Booth Saturday attached to the image.

Makes sense. That rallying cry has been bigger than ever in 2022, and Kansas fans have started to take it to heart and follow through on its message.

Then, a couple of days later, the campaign grew in intensity, when KU announced that the Leipolds were treating any KU students who did not yet have a ticket to Saturday’s game to a free ticket. That message, which was also sent out on social media, included the words, “Be early. Be loud. Bring the energy like you have all season long.”

In order to get the free ticket, students are being asked to visit a web site where they can register with their email address, student ID and password.

Kelly Leipold added her own plea to the KU student body, tweeting, “Hope to see all the students there! YOU ALL make a huge difference to these players!”

KU’s home crowds this season have been far and away the best in the post-Mark Mangino era. And while that has more money for the university through ticket sales, concessions and merchandise sales, it also has helped the program show anyone watching that Kansas does have a passionate football fan base and can be relevant in the college football world.

What once was a challenge for television cameras to show creative angles to make the stadium look less empty than it was was a piece of cake this season, with fans and emotion filling the stadium throughout the season.

Temperatures are expected to be in the 30s on Saturday, which may or may not impact how many fans show up to Memorial Stadium for the Senior Day finale.

The Jayhawks then will turn their attention toward Dec. 4, the day that they learn their postseason fate and the destination of their first bowl game since the 2008 season.

Flying in from Florida for the bball game tomorrow with my two young boys, and my brother is meeting us there from San Diego.

We're doing our part to help with the sellout on Saturday!

Another UT win by Leipold would be icing on the cake this year.

Fill it up Phil!