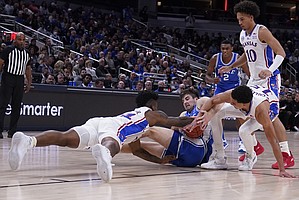 I’ve said this to a few people, a few different times, already this season, but last night’s effort by the Kansas defense in a 69-64 win over No. 7 Duke inspired me to write about it.

I cannot remember seeing a Kansas team that played this hard and with this much intensity on the defensive end this early in the season in a long time.

It usually takes some time for the Jayhawks to get to this level. That’s not to say they’re where they want to be or that they can’t get better, but these Jayhawks have been pretty turned up on the defensive end from the jump in each of their three victories.

There are a few reasons for this, and I still think the sloppy and lethargic start against Pitt State in their exhibition win sort of shocked their system and reminded them that that type of effort won’t cut it.

They haven’t looked anywhere close to that sluggish since that night two weeks ago, and instead have looked rabid and hungry during most of their first-half defensive possessions.

When your team is led by two players like Dajuan Harris Jr. and Kevin McCullar Jr., that can tend to happen. Both are tenacious defenders who pride themselves on their play on that end of the floor. And they’re both mature enough to understand that working a little harder on D makes things easier on offense. Jalen Wilson’s right there with them in that line of thinking.

And that has rubbed off the rest of the roster that already seems to have fallen into a clearly defined set of roles on the defensive end.

One other thing that I think has led to this tenacious start is the fact that these guys have taken the responsibility of defending last year's national title very seriously. A couple of them played for that team and are still beaming with pride over what that bunch did and was. The others want to prove they're worthy of being mentioned in the same breath as that group. Either way, both realities have really pushed these guys early on.

Again, there’s no doubt that this group can and will get better. But the fact that they’ve been bringing it on defense to open games in the early going is a sign of how much defensive potential this team has.

No play better exemplified what this defense is all about right now than the wild sequence of back-to-back blocks by KU’s littlest player (Harris) and KU’s biggest player (Ernest Udeh Jr.) during Tuesday night’s win.

FROM THE TOP ROPE pic.twitter.com/QzF2TPDN20

A few things stand out about this one.

• First, despite the fact that this has the look of an easy bucket for the Blue Devils, all five guys are hustling back to at least half court to insert themselves into the play. While Harris and Udeh get the highlights, McCullar’s hustle put him right there to dive on the loose ball, which ended up saving the possession. Some of this you can coach. But most of it is culture. And these guys clearly understand that, even the freshmen, two of which were involved in this play.

• Second, any time Harris blocks a shot, people who don’t follow Kansas closely like to throw their arms up and assume it’s a fluke. It’s not. Ever. Harris has longer arms than his body suggests and his timing and instincts when going after a block are darn near elite. Ask TCU’s Mike Miles Jr. about that.

• Third, watch the KU bench after the Harris and Udeh blocks. Everyone’s up and they’re all jacked. Again, that’s part of the culture thing we’re talking about. These guys all understand how big plays like this can be for the momentum of a game. Beyond that, seeing your teammates make these types of plays can make you (a) want to join them and (b) feel like you’re not doing your part if you don’t.

I’m sure the Kansas coaches would point out a half a dozen different reasons why this defense isn’t where it needs to be yet. Rotations, defensive rebounding, positioning and protecting the paint all need work to get up to the Kansas standard.

But when you play as hard as this team has shown it will play on that end of the floor, improvement seems more inevitable than ever.

Agreed. I don't recall seeing so many different players consistently throwing their bodies around to get loose balls like this team has been doing. They've shown more pressing after made baskets too I believe. I really enjoy seeing that effort and hurray for another exciting year of basketball.

Hell yeah.. at this point opponents should know that we've got Elite D squad, with guys average height of 6'3''? 13 blocks against 2 blocks (team played by guys whose avg height of 6'9'')?
That's unf*belivable... awesome bunch of defense-minded hardwork players. From here on, it's easy to tune our game, adjust the intensity of our D. Our focus should also be playing to win it all, better our offense: putting the ball where it should be: in the basket!!!!
Go JAYHAWKS uuuuhhhhh!!!

“When your team is led by two players like Dajuan Harris Jr. and Kevin McCullar Jr.“

Definitely true. It also occurred to me as I read it that the 5th starter was a key D sub during the NC run last year. Coach was even willing to put him on the best opposing player.

Coach would never show it, but he’s got to be almost giddy about the culture; peer motivated D.

Great point. KJ, though undersized, really opens up what this team can do defensively.

Last year it even rubbed off on Remy-who made a key block down the stretch in the title game.

Seeing all the blocks we got against Puke was beautiful- after seeing our guys’ shots at the rim getting swatted by the trees of Kentucky in recent years.

Saw the horns vs. Gonzaga score and pulled up the box score/gamecast to see how the 20-point differential happened. Looked like turnovers were the problem.

As I was scrolling through, I saw the attendance figures. 11K+ in an arena with 15K seats. Roughly 75% attendance. For a home game. Against the number-2 ranked basketball program in the country. On a night where there was absolutely nothing else going on. At a school that graduates 5,000 more students a year than KU. In a city 10-times the size of Lawrence, full of horns fans. And they were 25% short of capacity.

You left TTU for this? After leaving UNLV for TTU? Do you need Toby Keith to hold a concert after the game while wearing a white pillow case in order to fill the place?

Beard may very well win a championship at UT one day. And no one in Texas will care. Just one more reason to hate Texas, and hope that Beard gets the counseling that he needs.

I was at the Texas versus Gonzaga game. It was a sellout, and a jam-packed very impressive crowd.
The attendance figures / Moody Center stadium capacity shown in the graphic was incorrect. Chris Beard has it rolling in Austin.

I was at the Texas versus Gonzaga game. It was a sellout, and a jam-packed very impressive crowd.
The attendance figures / Moody Center stadium capacity shown in the graphic was incorrect. Chris Beard has it rolling in Austin.