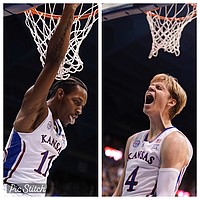 Both players used the word “dream” when describing their first games as Jayhawks, and both had a big impact on the Jayhawks’ wins over Omaha and North Dakota State.

“I’ve been dreaming about this for a long time,” Rice said Thursday night after making his debut to the tune of 10 points on 5-of-10 shooting in 18 minutes. “So, when I finally got that opportunity it was like, ‘Wow.’ It was a great feeling.”

Given the anticipation and excitement surrounding their additions to the roster, that certainly makes sense. But so, too, does the fact that these two five-star talents already look pretty comfortable as college players.

They’re roommates, they were both McDonald’s All-Americans and even though it’s still early it seems safe to say that both will play a huge role in just how good this Kansas team can be.

Dick delivered a monster game in his debut, scoring 23 points in the win over Omaha.

He showcased his entire game in that win, running wild in transition, delivering highlight-reel dunks to get the crowd going and showing off his silky-smooth outside shot.

Firmly entrenched as one of KU’s five starters, Dick came in with a ton of hype and already seems to be living up to it.

There are a couple or reasons for that.

The first is his talent. At 6-foot-8, with a pure jump shot and elite athleticism, there’s not much Dick can’t do on a basketball court. Beyond that, he’s not only confident in his ability but also as competitive as anyone on the roster.

The second is opportunity. Unlike some KU freshmen in the past, who had to blend in with more veteran rosters that already were loaded with scoring options, Dick steps into a pretty big role with this team.

The Jayhawks need him to score and want him to play with that mindset. KU coach Bill Self said that throughout the offseason and Dick’s teammates already have shown that they understand how important it is, looking for him behind the 3-point line and in transition.

There was a time when Rice and Dick were mentioned as an either-or proposition and the two were said to be competing for a starting spot. Dick’s outside shooting and an early back injury, which Rice described Thursday as “minor,” gave Dick the lead in the race for the starting spot.

But Rice does not seem to be bothered or overly concerned by whatever role he is given. In his debut, he played 7 minutes in the first half and 11 in the second, and made an instant impact, scoring an easy bucket inside and finishing a lob on a pass from longtime friend and fellow-North Carolina native Bobby Pettiford.

After the dunk, Rice stuck out his tongue to celebrate, keeping it out for some of his run back on defense.

“We knew he was going to play, and I know he was excited about getting out there,” acting head coach Norm Roberts said after the victory.

In Rice’s mind, Thursday night was just the first step, and he said he already has felt a lot of support from his teammates and coaches, most notably head coach Bill Self.

“I feel like he’s putting a lot of trust into me,” Rice said of Self. “He wants me to be great. With that being said, that means I’ve got to work. My role, I hope in February, is for me to be the energy of the team. I want to keep growing, but also I want to help these guys grow, as well. Whatever that takes.”

Both KU freshmen — along with fellow first-year players Ernest Udeh Jr. and Zuby Ejiofor — will get a taste of the big time next week, when the fifth-ranked Jayhawks play No. 7 Duke at the Champions Classic in Indianapolis.

Tipoff is slated for 8:30 p.m. Tuesday night at Gainbridge Fieldhouse on ESPN.

KU’s Norm Roberts on the Jayhawks performance in an 82-59 win over North Dakota State by KUsports.com

Grady was awesome and Rice was solid and looks to be a future monster. But I am totally digging BobbiyPettiford‘s game. He can score like Frank Mason and last night he dished out eight assists in limited time. Wow.

This will be a killer combination: Dick, MJ, Bobby, Udeh, McC.
Or anyone plus 4 of the bunch will be just as lethal.

I think we all expected Gradey to be great on offense, but I've actually been quite impressed with his defense as well. Sheesh, how many deflections has he already had in just his first two games? It seems like every few times down the floor, he manages to get a deflection or a steal.

Len, I totally agree. He's cutting off the passing lanes and deflecting passes soon after they leave the players hands. It's contagious and our D has really shined as a result. Hopefully, this will continue against the great teams like Duke. Rice is a stud and he looked great too, but he also made some poor decisions and I'm betting Self will be all over him on those. I thought our bigs are all projects, but Udeh looks like he can play NOW. Not so sure about Ejiofor YET. What`s happened to Zach?`

Zach is in quite a tussle for minutes, and that’s without the wise old man Martin in the mix. Practice could be more competitive than many games this year. So much potential. Who will bring the extra energy every day?

Zach should transfer. He won't be a threat on offense, but does a pretty decent D. Not sure if he has that offense minded. Same thing with Adams - boy... him & Harris were just playing tag on offense; Adams also showed unawareness of Bobby's delicious dish. A lot of room for improvement.... Martin showed more potential to be an offense option at the 5; only time will tell. Good thing, we have capable 5 in Udeh who looks the most ready of all bigs. Hopefully, Zuby will pick up from watching Udeh.