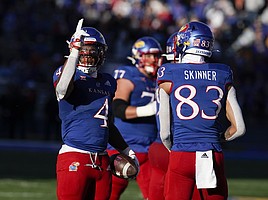 Kansas running back Devin Neal (4) celebrates a long run against Oklahoma State during the third quarter on Saturday, Nov. 5, 2022 at Memorial Stadium. by Nick Krug

It’s been a while since anyone’s had to take a real look at how the Kansas football program could earn its way into the Big 12 Championship game.

But that time is here. And it’s real.

I’ll give you a minute to catch your breath and take a seat if you need to.

At 3-3 in the Big 12, KU currently sits one game behind K-State, Baylor and Texas for second place. All three of those teams are 4-2. Kansas is tied with Oklahoma State, but would own the tiebreaker with the Cowboys in a head-to-head situation.

It’s super interesting that, with three games remaining, the four teams most firmly in the mix for the No. 2 spot all play two games against the other three down the stretch. That should make for a wild finish one way or the other and it certainly sets up a couple of potential winner-take-all scenarios for that final week of the regular season.

With that in mind, here are the things that need to happen for Kansas to be one of the two teams playing for a Big 12 title in Arlington, Texas on Dec. 3, most likely against TCU, which currently is unbeaten, ranked No. 4 in the nation and fighting for a spot in the College Football Playoff.

1 – The first and most important thing that has to happen is Kansas has to win out. Even just one loss — to any of the three teams remaining on KU’s schedule — would essentially eliminate the Jayhawks from Big 12 title game contention.

2 – KU fans actually need to root for Kansas State to beat Baylor this weekend in Waco, Texas, because the Jayhawks need the Bears to lose twice in their final three games to have a shot at the title game. BU also plays TCU at home and at Texas, so Baylor dropping two of three isn’t exactly crazy.

3 – Speaking of Texas, the Jayhawks will have a say in whether UT wins all of its remaining games — KU hosts the Longhorns on Nov. 19 — but the Jayhawks certainly would not mind if TCU toppled Texas this weekend. If both UT and Baylor make it through the next two games without a loss, it’ll be that game — Baylor at Texas on Nov. 25 — that decides who plays TCU in the title game.

4 – The easiest thing for KU fans to remember here, other than rooting for the Jayhawks to win out, is to root for TCU. The Frogs get both Texas and Baylor in the next two weeks, and TCU wins in those games would only help the Jayhawks. Beyond that, at this point, TCU is the Big 12’s only chance at being a part of the College Football Playoff and if they can get in that would mean more money for the rest of the conference.

I know that’s kind of a lot, but it’s really pretty simple — KU just has to win out and hope Baylor loses two of three. In that scenario, even if Texas were to go 2-1 down the stretch, as long as the loss was to KU, both teams would finish tied at 6-3 and KU would win the tiebreaker for having beaten Texas.

Other than TCU, which is in the driver’s seat, Baylor and Texas have the best opportunities in front of them. Either team just needs to win out and they’re in. As mentioned above, they play each other so they can’t both win out. Kansas and Kansas State also need to win out but still would need help even if that happened.

Asked if he looks at things like the standings and KU's potential to reach the title game, KU coach Lance Leipold said simply, "(If we play well) down the stretch, a lot of things are possible.”

He then added: "There’s so much this group has done and embraced and the job that our coaches and staff have done… that’s probably a few weeks to months down the road to truly reflect on. We’re proud but not satisfied.”

It’s definitely a long shot for KU to get to Arlington, but it’s not by any means impossible. The fact that we can even say that at this point in the season is yet another indicator of just how far this program has come.

The fun starts at 6 p.m. Saturday, when KU travels to Lubbock, Texas to take on Texas Tech.

Here’s a look at the final three games for all of the teams that are still in the mix for a trip to Jerry World in December.

Matt check what you are drinking. I get that statistically it is possible that we could make that game.

It is also statistically possible that anyone can win the lottery.

It is not a cakewalk for these last 3 games. Texas will be looking for blood, and K-State is going to be a tough game.

Who is Texas Tech QB?

Edward - Another fun question is how many passes will KU intercept?

But as the players and coaches have said all along - next game.

Matt - Thank you for the article also for the mental exercise. It is tough to change the brain from expecting losses. It would seem that is part of the culture change that Coach Leipold has talked about from the beginning. The players have learned it from the coaches. Now, we as fans need to learn it as well. You get to be our coach. Thanks Coach T 😉

Behren Morton is injured, so Tech is going with Tyler Shough or Donovan Smith.

All three of these QB's have taken snaps for Tech this year.

Can the KU Defense step up to the challenge of holding down the Red Raiders?

I really do not know the answer, time will tell. Rock Chalk!

This article is now officially toast.