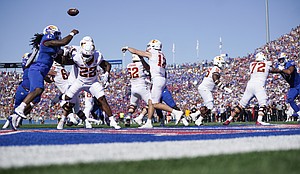 It’s been a few weeks since football fans in Lawrence made it their mission to Pack the Booth and fill up David Booth Kansas Memorial Stadium for the surprising Jayhawks’ home games.

And even though Kansas has lost three games in a row since its last campaign to sell out the home stadium, head coach Lance Leipold said Monday he was hopeful that his team has shown KU fans enough to make them want to keep showing up.

“I hope (it’s) another great crowd; we need a great crowd," Leipold said. “Again, I hope for the future of this program, as we continue to work to build winning consistently in this program, that it’s not undefeated records that get us to fill this place. Because there’d be a lot of non-filled stadiums across college football (if that were the case).”

The Jayhawks were 3-0 heading into their first home sellout of the season against Duke, and they followed that up by selling out the stadium at 4-0 for the Iowa State game and 5-0 for the ESPN College GameDay showdown with TCU.

Kansas (5-3 overall, 2-3 Big 12) lost to TCU that day and went on to lose back-to-back road games at Oklahoma and Baylor before last week’s bye week. So, there’s no doubt that some of the shine has been knocked off since that exhilarating 5-0 run to open the season.

But this is still rarefied air for the KU football program and, if anything, one would think that Kansas fans might actually feel like showing up even more right now, to serve as a factor in KU’s quest for that sixth win for bowl eligibility.

That’s certainly what Leipold is wanting to see in the month of November, when KU will host two more home games, Saturday vs. No. 18 Oklahoma State and Nov. 19 vs. Texas.

“I still hope that people are excited,” Leipold said Monday. “And though the wins of late haven't been there, the competitive nature of this football team for four quarters is something that I hope our fans are respecting and enjoying and will want to come out and support.”

The reason Leipold is hoping for KU’s huge home crowds to continue goes way beyond wanting Kansas fans to have something to feel good on Saturdays. He actually has concrete proof that their presence as the Jayhawks’ 12th man has made a difference.

"One of our assistants talked to one of the opposing coaches of one of the three sellout games we had," Leipold said Monday. "And they talked about the fact that they did not prepare for crowd noise and it was a factor in the game. So, to think that our fans can make a difference, 100%. Absolutely. And we need them there.”

As of Monday night, plenty of tickets for Saturday’s game were available on third-party ticket sites, so it appears as if the Kansas fan base has some work left to do if it wants to sell out Memorial Stadium for the fourth consecutive home game.

Kansas entered the week as a 3-point underdog to the Cowboys, who are coming off of a 48-0 loss to Kansas State last weekend in Manhattan.

Kansas football coach Lance Leipold on the benefits of the bye week & facing Oklahoma St. in Week 10 by KUsports.com

That is such a stupid vote. Venables ahead of Leipold? Purely a popularity contest...

True, but it also just one factor in the determination of the award. And, thus, worth getting LL as high in that vote as possible.

We would absolutely be at the game if we were a reasonable driving distance from Lawrence but our home is 1,611 miles from Lawrence. We will watch on TV.

With OSUs QB situation being potentially more unstable than ours, this could be the best opportunity left for #6. They definitely miss their DC from last year as well as the players that left with him.

All that aside, this team is exciting to watch. We definitely need 4 quality quarters.

Light rain and drizzle. Blustery south southwest winds with occasional gusts to 25 MPH. Temps mid 50s through the game. That's not bad for a November game. I'll be there with my outside voice & hope to see another full stadium.

Plus basketball season has started, students have historically lost interest in FB.

The vibe is gone...the defense is so bad that it isn't fun watching...Baylor pumped the brakes on us or it would have been really bad...Aranda wasn't going to run it up..but he could have..we need a lot of help on D...it will take a few years...folks may show up ..but will leave by halftime to catch the 2nd half of the Tenn-Georgia game...that's just the way it is...The Oklahoma game was so bad that everyone has lost interest... OU could have scored 100...and I am a big fan...we are playing BAD football right now and I am not going to watch it...it hurts too much! That defense is unwatchable!

I guess there are fair weather fans and then there are those of us who want to watch the team improve even though it sometimes means watching them struggle. We've been doing that for years. Not changing now. To the rest, bye.

I am a huge fan as you know...just sending a message...hope it works!