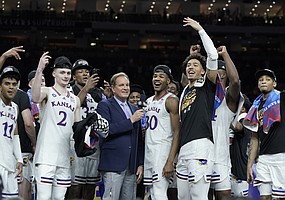 The Kansas Jayhawks elebrate their 72-69 win over North Carolina in the NCAA National Championship game. by Nick Krug

On his final “Hawk Talk” radio show of the 2021-22 school year, Kansas coach Bill Self on Thursday night spent some time looking back on the Jayhawks’ national title and to the future for some of the players who delivered it.

Self said he has watched the KU-North Carolina title game double digit times since it happened in early April and again praised David McCormack’s role in helping win the title, saying once more that he believes McCormack’s jersey deserves to hang in the Allen Fieldhouse rafters one day.

“Those last two baskets he made to win that (title) game, I mean those were big boy plays,” Self said Thursday. “David played at a ridiculously high level. All those people that doubted David — and maybe there was a time or two I did a little bit — should all basically owe him some form of gratitude or apology. He showed everybody he could put us on his back and carry us when it counted the most.”

While the 2022 title team will be celebrated and remembered forever in Lawrence, many of the key players who were on that roster will no longer be around.

And Jalen Wilson, who was a couple of rebounds shy of averaging a double-double throughout the NCAA Tournament, is in the final stages of his stay-or-go decision to jump to the pro ranks or return to Kansas.

Self offered a little update on all of those players during Thursday’s “Hawk Talk” show.

• Self said he’s hearing that Agbaji, with his stellar senior season and strong showing at the NBA combine and in individual workouts, has “played himself into a more-than-likely lottery pick.” That comes as little surprise given that Agbaji has appeared on mock drafts in the 14-20 range for most of the past several months.

• Self noted that Braun, who announced earlier this week that he was keeping his name in the draft instead of returning to Kansas for another season, was “obviously doing well.” Some mock drafts have Braun landing in the last few picks of the first round and Self believes CB “may have played himself into the first round” with his strong all-around showing at the combine, from testing and measurements to scrimmages and individual workouts.

• Self said Wilson “helped himself tremendously” at both the G League Elite Camp and NBA combine that followed it. Sources have indiciated that Wilson’s decision will likely come closer to the June 1 early entry withdrawal date — next Wednesday — and Self said Thursday night that they’re expecting to hear something from Wilson “in the next five to six days (about) what he’s going to do.” Of Wilson’s May performance, Self added: “He’s played great. He’s shot it great.” Self also said he has no rooting interest in what any of these players did or did not decide about next season. “We should want them to do what is best for their life,” Self said. “I think they all will make good decisions.”

• Whether his jersey hangs in Allen Fieldhouse or not, Self said McCormack has a chance to make a lot of money playing basketball. “David is going through the process,” Self said. “He played in the G League Elite Camp. He was good, solid. He didn’t get invited to the big combine, still yet David McCormack has a legitimate chance to be a 2-way (NBA/G League) player. Those guys make about $460,000 if they are able to stick. He could be an Exhibit 10 guy like (former KU forward) Dedric (Lawson). That’s the $100,000 (per year) range. Or David could go overseas and make really good money,”

• Self said KU lifer Lightfoot is also looking at his options to continue his playing career. “Mitch has signed with an agent. They are looking for a place for him to go, probably overseas more than anything. G League could be a potential option. I would think probably overseas, to try to make a little bit of money, would be great. I would recommend that. If he can get in a good spot, see the world at age 29, I think that would be great.” Those comments included one last Old Man Lightfoot joke on his way out the door. Although he was at KU longer than most, Lightfoot is still just 24 years old and will turn 25 in July.

• Self said Martin’s future likely lies overseas, as well. “I think Remy could kill it in certain areas, primarily the Philippines because those teams are allowed two Americans. Remy (who has passport from the Philippines) wouldn’t count against the two (Americans allowed on each roster) but he would probably be the highest paid player in the league.”

• As for Coleman-Lands, who Self said could be “a CEO or billionaire at the age of 31,” he may still try to play somewhere while continuing to build non-profit organizations and entrepreneurial spirit. “He doesn’t know exactly what the next move is for him,” Self said.

As I read this, I remembered a comment/lament I made late in the season about wishing we had a player that we could dump the ball to and be confident of a basket after what seemed like too many missed bunnies. That was David at the end. Hat tip of great appreciation. A job well well done.

Coach also commented earlier in the year, when David was struggling and some were calling for him to be jettisoned, about our ceiling being the highest with David and why he was sticking with him. Not terribly different than TT in ‘12. Just one game better this time.

Im comfortable that between this board, and conversations with KU fans and alums that I on multiple occasions expressed frustrations with David McCormick. But it seemed like the 2nd half of his Senior year he played like a Senior and realized whatever happens, this was it.

When he made those baskets at the end of the game I was nearly in tears. Of the guys -- the human heartburn machine -- was the one who hit the big shots to win it had a level of satisfaction and fulfillment that was just off the charts. Trying to explain it to my wife was difficult, but made it clear that him being the guy who made the biggest shots at KU in a decade+ was somewhat improbable. And awesome has it gets.