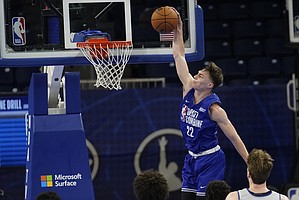 Jayhawks Christian Braun and Jalen Wilson were on the same team for Day 2 of the NBA combine scrimmages in Chicago on Friday, and the two reigning national champions played a big role for their squad.

One day after scoring six points and filling up the stat sheet elsewhere, Braun showed he can score, too. In 29 minutes off the bench, the KU junior scored 17 points on 7-of-17 shooting, including a 3-of-8 clip from 3-point range. He added four rebounds, two steals and an assist while also picking up four fouls in his team’s 113-107 loss.

Wilson, meanwhile, was in the starting lineup for Team Weaver and he played 30 minutes, scoring nine points on 2-of-10 shooting, including a 1-of-3 showing from 3-point range.

Wilson added six rebounds, six assists and a steal while also turning it over three teams.

That ended combine week for three Jayhawks, — Braun, Wilson and Ochai Agbaji — who will now continue to workout for NBA teams leading up to this summer’s NBA draft, which is slated for June 23 in New York.

According to Rivals.com’s Krysten Peek, Wilson met with the Nuggets, Pistons, Bulls, Pelicans, Raptors, Warriors and 76ers at the combine. He still has plans to meet with Milwaukee and Minnesota, as well.

Braun, meanwhile, entered the week as a likely first-round pick and appears to have solidified that standing with his showing in the scrimmages and testing numbers in both team and individual drills.

Agbaji is staying in the draft, but both Braun and Wilson have until June 1 to pull their names from the draft pool in order to retain their college eligibility.

The guess here is that Braun will stay in the draft. If I had to put a number on it, I'd say he's sitting 90-10 toward leaving Kansas for the NBA.

Wilson is in a slightly different position. He had a solid showing this week and he no doubt helped himself in the eyes of NBA scouts and executives. However, he was starting from a little bit further down the draft board, which makes his decision much harder than Braun's.

Wilson was not on any mock drafts entering the week and he did not land on the updated two-round, 58-pick ESPN.com draft midway through the week after the NBA draft lottery was set. That would lead many to believe that Wilson will return to Kansas for his junior season, but I don't think it's by any means a lock that he'll do that.

He showed well in Chicago and did about as well as he could've hoped to do. My guess is that his performance took his status from a no-brainer to return to KU to having a real decision to make. If I had to put a number on where Wilson's at, I'd put it at 50-50, which is significantly different from the 80% he stays, 20% he goes scenario I had it at before the week began. 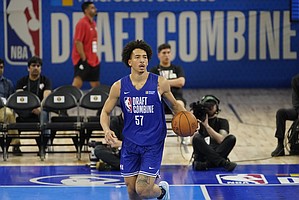 Thanks for the info and the return of the percentage wheel. Maybe the high of winning a championship hasn't worn off, but even if both leave it feels like the roster is still in great shape. Winning back to back 'ships is highly unlikely without key returners but this roster really seems like it could make noise next year and is one year away from being a clear top 3 team again.

I watched them play yesterday and was pleased they both did well. Even though Jalen shot it really good in the G League trials, he still is not consistent from the outside and that may be his downfall in getting any consideration is this draft. Braun was great on both ends of the floor and has to have impressed many of the scouts. They both make a team better and represented Kansas with class.

Well Put Blake, and the outside shot demonstrated by Wilson at KU on a consistent basis, next year is what will put him in the draft maybe even top 15. I hope he comes back and lights it up.
It will definitely impact our team next year, positively or negatively. And without him, we struggle a little bit early in the season to get the overall cohesion and role establishment.