Eyeing a jump to the NBA, Texas Tech's Kevin McCullar Jr. says he will play next season at KU or Gonzaga if he pulls out of the draft 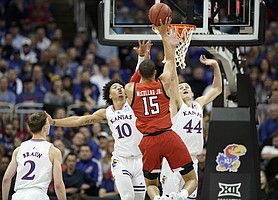 Kansas forward Jalen Wilson (10) and Kansas forward Mitch Lightfoot (44) defend against a shot from Texas Tech guard Kevin McCullar (15) during the first half of the Big 12 Tournament championship game on Saturday, March 12, 2022 at T-Mobile Center in Kansas City. by Nick Krug

If he isn’t, it could be massive news for the Kansas men’s basketball team.

McCullar, a 6-foot-6, 210-pound, all-conference-type guard who spent the past four seasons playing at Texas Tech, revealed Sunday that his top priority this offseason was to reach his dream of playing in the NBA.

However, if after testing his draft stock McCullar does not like what he hears, he has a back-up plan. And it does not involve returning to Texas Tech.

Instead, he said Sunday night in a social media post that he will play next season at either Gonzaga or Kansas.

So where does Self come into play here?

Simple. On a couple of occasions during the 2021-22 season, Self called McCullar “a pro” before the Jayhawks and Red Raiders faced each other.

Either way, if he’s not in the NBA next season, there’s a 50% chance he’s coming to Kansas.

“I would like to sincerely thank Red Raiders Nation for your unwavering support,” McCullar’s post began. “I poured my heart & soul into Texas Tech. I am extremely thankful to all the coaches that have reached out and provided an opportunity to join their program. With that being said, playing in the NBA continues to be my dream and my priority! If I decide to return to college, these are my final 2.”

The post included KU and Gonzaga logos above McCullar in his black No. 15 Texas Tech jersey.

That news set off series of social media and message board fire directed at McCullar for being a traitor. It reached such a fevered pitch that he felt as if he needed to respond to the responses to his original post.

In it, he said, in part, that “decisions are mutual,” adding “Quick to accept a transfer but bash one for leaving.”

McCullar then paid tribute to his work ethic, how he’s proud of who he has become and how he battled “my whole life through ups and downs.”

He then closed with: “I truly pray for our world and the people that can sit behind social media and act the way they do. Hope my platform can open one person’s eyes.”

None of the hate or McCullar’s reply means much right now. And it certainly will not be a factor in his decision to stay in the draft or pick KU or Gonzaga.

But if he does return to school, it’s not hard to envision how crazy that KU-Texas Tech game in Lubbock, Texas, will be next season if McCullar is suiting up in a KU uniform that day.

Remember how wild the Texas Tech fans got when Chris Beard returned to Lubbock with Texas this season? I think we’re talking close to that kind of energy and anger.

He has to pick KU for us to ever see that play out. But it’s already clear that Self is a fan of McCullar’s game.

In 29 games for the Red Raiders last season, McCullar averaged 10 points, 5 rebounds and 3 assists per game. He ranked second on the team in total assists and steals and also shot 31% from 3-point range.

Known as a stat stuffer who does a little bit of everything and is fundamentally sound in all areas, McCullar earned honorable mention all-Big 12 nods in each of the past two seasons and also was a Naismith Defensive Player of the Year semifinalists during the 2021-22 season.

McCullar redshirted his first season at Texas Tech and he hails from San Antonio, where he starred at Wagner High School.

Because we know that McCullar’s goal is to make it to the NBA, it’s likely going to be a while before we know what his immediate future holds.

Like current Jayhawks Christian Braun and Jalen Wilson, McCullar will spend the rest of the month working out, likely attending the pre-draft combine and showcasing himself for interested NBA teams.

He has until June 1 to withdraw his name from the 2022 draft pool. At that point, provided he follows the guidelines for maintaining his college eligibility, McCullar would be able to sign with one of his two finalists and begin the process of preparing for his senior season.

I suppose a commitment to either KU or Gonzaga could come before the June 1 withdrawal deadline. But I wouldn’t count on that happening.

The Texas Tech "turncoat" is a legitimate "glutton for punishment"!

It’s interesting that he would make this announcement now. It’s hard to see an upside. If he does stay in and gets drafted, he’s just gone from being a great player to being an outcast. Not the end of the world for sure but I’m sure former players love being welcomed home. Now he’s homeless.

It is understandable that we would be a dream destination, especially after seeing our remyfication last year. It’s easy to see Coach being interested if CB stays in the draft. We’ve got lots of potential at wing, but McCullar is pretty much an plug in starter.

Lots to like with him, though some might give him a hard pass. I’m not familiar with him at all, but the one comment from scouts that I could envision is raise your 3pt% by at least 5.

Maybe the biggest question though is would Dillon Wilhite be willing to trade his 15?

His coming to KU would likely bump us up in the pre-season polls. This on top of having the 3rd highest recruiting class. Wow.

Highly recommend watching this clip of Landen Lucas and his father talking to Bill Self about the championship game and the celebration after the game.

Of interest to me was when he discussed the play where Bacot went down with the sprained ankle and Jalen Wilson didn't attack the 5 on 4 and the refs stopped play to get Bacot out. Basically Wilson got confused about whether to run clock or attack the 5 on 4 and Bill Self called it the "stupidest" play, but then acknowledged that it worked to Kansas' advantage because they still got the mismatch of DMac on Manek on the next play.

Great link Jonathan. It always fascinates me to hear Coach speak about what they’re doing and thinking. Even better with a former player.

Lucas’ comment about twitter fans throwing in the towel at halftime reminded me of when some fans were quitting on the team in the middle of the 2015 World University Games.

Love Coach’s balance between calling out a dumb play and then running a potentially better play, plus pointing out where players make critical off the ball plays that most expert commenters never notice. Gotta love that he’s willing to admit that he allowed the players to call the play/D to end the game. So much for he’s too rigid.

McCullar is a waste of a jersey. How does a 10pt average, weak 31% 3-point shooter a Plug and Play starter? He can defend but he was shut down by teams during the season.

Why does he get to call his shot where to play, if no NBA team is interested, at Gonzaga or KU? Plus this is a bone headed move, why would you box yourself in?