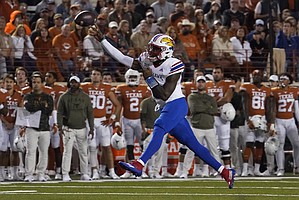 Earlier this week, the gambling site, BetRivers.com, came out with the first set of college football over/under win totals for the 2022 season.

As per usual, Kansas had the lowest number in the Big 12 Conference. But the Jayhawks’ number for 2022 was also higher than it has been in a little while.

As usual, it’s a tough number.

I’d imagine the general consensus among most Kansas fans here is that the over is a pretty good play. After Lance Leipold led the Jayhawks to two wins in Year 1, surely he can get to three or four victories in Year 2, right?

Based on the momentum and trajectory of the program at its current state, that definitely seems logical. But the fact of the matter is, last season’s results have absolutely nothing to do with what will happen this year.

Sure, there was some late momentum, but the bunch they put on the field in 2022 will be a different team with a lot of new faces. While many of the same leaders return, it’s far from automatic that the Jayhawks will just pick up where they left off, when they played three of their best games in a while in November, beating Texas on the road and playing TCU and West Virginia to within one score.

Having said that, there’s still a lot to like about the over.

For starters, the opener’s a virtual lock and this team absolutely should open the season at 1-0. That in and of itself could create some momentum.

The question is: What will Kansas do with it?

Week 2 takes them to West Virginia. While the Mountaineers were just 6-7 a season ago, they recently added a pretty important quarterback transfer in former USC and Georgia QB JT Daniels, and going on the road that early, with a new team — for a conference game, no less — will be no easy task.

After the early conference clash, KU then travels to Houston for Game No. 3. The Cougars are tough and were 12-2 last season, and you’re looking at another early game away from home. Don't be shocked if KU winds up getting out of this game because of Houston's impending addition to the Big 12 Conference. Nothing official has happened on that front yet, though, so, for now, we have to take it into consideration.

From there, the Jayhawks return home for three in a row against Duke, Iowa State and TCU. With four of the final six games coming in conference and on the road, that three-game stretch in October could be massive for both this team’s confidence/psyche and for those who might choose to bet the over.

The Blue Devilis are still adjusting to a new coach and, as of today, don’t know who their quarterback will be. Beyond that, they were winless in the ACC a season ago, even after beating Kansas 52-33 in Durham, North Carolina in Week 4. It’s hard to know exactly what any of that means for this year’s matchup. Reports from down south suggest that the Blue Devils are reenergized and ready to bounce back from a tough 2021 season by setting the tone early in 2022. That started this spring and figures to continue well into August.

Regardless of how things progress on Duke’s campus, it seems fairly safe to say that, at Kansas, those who take the over will really need KU to beat Duke to feel good about their bet.

If the Jayhawks do — and even if they lose at West Virginia and at Houston — they’ll be just one win away from the 3-win mark one month into the season.

From there, it just takes one more win to cash the ticket. Sure, that win will have to come against a Big 12 foe. And, yeah, those have been tough to come by. But a 2-2 start at KU would be significant and likely would give this group a fairly good-sized surge of confidence. It would not be impossible to see them winning one more game in their final eight after a 2-2 start.

Lose to Duke, though — therein starting the season at 1-3 — and things quickly get a little dicey.

If the number were set at 2, I think you’d have to bet the over, feeling comfortable that you can always get your money back with a push after a 2-10 season. At 2.5, you’re basically counting on KU to win the two games it could be favored in and then still hoping for a Big 12 win after that.

Doable? Absolutely. In fact, I’d say with absolute certainty that the players in crimson and blue this fall would all tell you that going over the 2.5-win number is a lock. And you’ve got to like that confidence.

Do you have to like it enough to make the over bet? That’s a different question. I think they could get there. Even four wins would not really shock me. But when you’re talking about a wager, you have to look at things through a slightly different lens. That’s why, to me, the over bet for Kansas football feels like it might still be a year away.

I don't doubt that the Jayhawks will be better this season. It seems as if the culture has changed for the better, Leipold continues to upgrade the talent on the roster and Year 2 figures to be a smoother ride than Year 1. But this is still a massive rebuild that's taking place and while steady improvement can occur, I'm not sure the program is in position to skip any of the steps that are required when trying to go from doormat to bowl contender.

Here’s a look at the rest of the Big 12 numbers:

I really do not like having conference games before completing the non-con schedule and its opportunities to tune the offense and defense.

I'll take the over, anyhow. Three wins is my forecast with four being possible.

“the bunch they put on the field in 2022 will be a different team with a lot of new faces.”

Is this factual? Obviously, there will be some new faces, but a lot? Lassiter, Clark, Johnson, DBs Thomas and Webb. We lost others, though I don’t think they were significant contributors on the field. For the second year in a row, we were one of the youngest teams in the country. I’m expecting to hear that we are among the highest percentage of returning players.

I think we also have twice as many super-seniors this year as last. That tells a lot about the program beyond all the annual coachspeak optimism.

One should be a gimme, and maybe the only game to start the year where we are actually favored. Duke should again be the next lowest rated team, though WV being late optimism last year and early this season could be the litmus for this season. Breaking out is tough when 12-2 is the third non-con.

The cautious optimism is probably wise, but in my book gotta get 3 if there’s actual improvements. Especially after going from no spring ball for the staff to having a full year in the system.

When you are rebuilding a program in the Big 12 (where there are no easy games) the last thing you want to see on your non-conference schedule is a road game against a top 10 team and then play Duke who has handled the Jayhawks in the past (most recently a 52-33 road loss in 2021). Hopefully, past commitments are ending and Leipold can provide input about the future non-conference schedule. Unlike basketball, where Self loads the non-conference schedule for future NCAA tournament seeding, KU football needs to have 3 winnable games before the regular season. Will KU improve their win total from 2 to 3 games with a full year of offseason under Leipold and his staff? I will hope KU is on the over side of 2.5 wins. Rock Chalk.

I think it's just right. 3 wins will be tough with the current schedule but a good accomplishment and 2 wins will be a disappointment where fans will be left wondering if progress is being made.