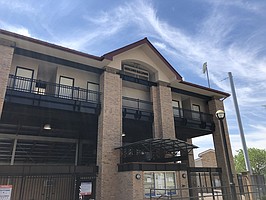 The front entrance to Hoglund Ballpark, home of Kansas baseball, is shown here in this June 2020 photo. by Matt Tait

It’s now been two weeks since Kansas baseball coach Ritch Price announced his retirement, and while things have been mostly quiet on the search to replace him, the process is underway.

Here are a few thoughts as KU moves into Week 3 of the post-Price era.

• As of late last week, I don’t believe any candidates had been formally interviewed just yet. But I think that’s probably coming very soon.

• If you weren’t careful, you might think you were watching a replay of the search that found KU football coach Lance Leipold. As expected, KU AD Travis Goff has gone about this search in a very similar way, starting with internal conversations and evaluation followed by conversations with former players. I heard a recent conference call of former KU baseball players included around 40 people, all of them with sincere interest in helping Goff determine exactly what the program needs from its next coach.

• From the sound of things, the interest KU has received from potential candidates has been very encouraging.

• A couple of new names worth adding to the candidate pool include Lousiana Tech head coach Lane Burroughs, whose team was just eliminated from the postseaon on Sunday; Duke assistant coach Josh Jordan; and Maryland head coach Rob Vaughn. There may be others, too. These were just a few names I heard in the past week or so that may be in the mix. Many of the names on our initial list from two weeks ago have either expressed interest in the job or been a part of the conversations about what the program needs.

• My guess is this thing will be wrapped up in the next couple of weeks. The fact that the college season is ending for a lot of programs — with the College World Series set to begin next Thursday — likely will open up the pool a little more and make interviews and contact easier for people on both sides. Beyond that, I would imagine KU wants to move as quickly as possible here because the next coach, whoever it is, is going to have to hit the transfer portal to make sure his first team includes a full roster. The deadline for spring sports athletes to enter the portal in order to transfer before next season is July 1.

Thanks for the update Matt.

Interesting that a BigTen head coach would be interested in an equivalent position at a school in a conference that some feel is headed to irrelevance, or at least in decline.