Agbaji or Braun? Who's your pick to have the better NBA career? 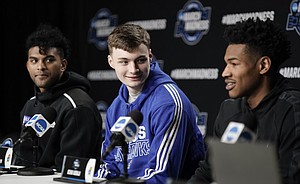 Back in 2011, when former KU forwards Marcus and Markieff Morris were awaiting their NBA draft fate, the general consensus was that Marcus would be the higher pick of the two.

Markieff, many believed, was merely a role player. Don’t get me wrong: Most people knew Markieff had an important role for the Jayhawks and that he played it extremely well. But there was definitely more hype surrounding Marcus.

At the time, NBADraft.Net wrote the following: “(Marcus) Morris is one of the most NBA-ready players in the draft and should be considered a lock for the lottery.”

That’s exactly where he went, selected No. 14 overall by Houston with the last pick of the lottery that year.

One pick earlier, however, it was Markieff’s who heard his name called first by then-NBA Commissioner David Stern.

Consider this analysis from NBADraft.Net on Markieff before the 2011 draft: “Though he lacks the upside of most lottery picks, he’s one of the safest options in this year’s draft.”

The reason? Because, with an NBA body and the ability to rebound at a high level, it was easy for people to see how Markieff would make a living. And he’s done exactly that for the last 12 years, earning roughly $50 million and an NBA championship over 715 NBA games with seven different teams.

Marcus has earned closer to $60 million during his career, so it’s clear that things worked out just fine for both Morris twins.

So what’s the point or reliving draft night for the Morris twins? Because I’m starting to have that same feeling about Christian Braun and Ochai Agbaji in this year’s draft.

Full disclosure: I don’t think there’s any way Braun will be drafted ahead of Agbaji tonight. Agbaji, to me, seems like he’ll fall in that 13-18 range while Braun is almost certainly in the mid-20s to early-30s range.

But as you listen to the draft analysts and read predictions about the two players’ futures, it’s clear that most think Agbaji has the higher ceiling.

Would it be crazy to think that Braun actually does, though?

I don’t think so.

I think both will have long and fruitful NBA careers, so we may be splitting hairs here just a bit. But it’s worth remembering that Braun is still a year younger than Agbaji and therefore may have more room to grow.

Think about where Agbaji was a year ago and how much of a jump he made during his senior season at Kansas. Now project that same type of jump for Braun in the year ahead and think about what that could look like.

Braun’s intangibles are already off the charts. He’s the type of player that any coach would like to have on his roster and he’s a fierce competitor with a good blend of confidence, cockiness and humility. If he can work his jumper into becoming lethal and learn a few tricks to increase his defensive presence, he could be a weapon in a number of different ways.

Agbaji is more polished today — remember, he’s a year older — and figures to bring more of a steady game to whatever team drafts him. That likely will keep him in the league for a long time, but I wonder how much breakout potential he has.

None of this matters in the big picture, of course. Both former Jayhawks appear to be well on their way to being first-round picks later tonight and we know that both will bring incredible work ethic and passion for the game to their new teams.

And the reality of the situation is that they'll probably end up having careers that look pretty similar, both in terms of production, impact and earnings. That's certainly been the case with the Morris twins, but only one of them has a ring and he might not have been the one that people expected to get it back in 2011.

Coverage of tonight’s draft is slated to begin at 6:30 p.m. on ESPN, and we’ll have all kinds of reaction and coverage of the landing spots for Agbaji and Braun throughout the night.

I do understand what you're saying about Markieff and Marcus. Markieff having a ring to me is a weak argument as an indicator as to who has had the better NBA career, but it is because both players have had very good staying power in the NBA and both of the twins have been strong and key contributors on several teams in their career. It's really fitting that they've had such similar success, and Markieff landed early on in a spot where he was a good fit for a big role. It took Marcus a little longer to find a place to catch on.

I agree with Christian. He seems to have more of a fighter's mentality about him. I think his nature lends itself to him carving out a good career. Where even though Ochai was the man for KU this year, he's still more of a passive player and comes off as more of a reluctant hero which may not lend itself to him ever reaching his full potential in the NBA.

Devonte is a totally different player than Christian, but they both have a similar swagger, and Devonte is a player that surprised many people with his talent in the NBA because he's hardworking, confident, and talented. That makeup is also in Christian.

Ochai on the other hand should take heed of the career trajectories of fellow Jayhawks such as McLemore and BRush, maybe both of them had OK NBA careers, but neither really made much of a name for themselves and they just kind bounced around as long as they could be useful as spot up shooters and serviceable defenders. It seems like its a little harder to find meaningful minutes as a 3 man in the NBA because the position has always been loaded with superstars. Och could become a superstar, but he's going to have to excel early in his career as a role player first.

It seems unlikely that either will be one of the elite 3 for any team that seems to be necessary for a team to excel. All the teams seem to shuffle players in an attempt to get those elite 3.

CB seems to have landed with a more stable team so maybe that leads to a more stable career. Hopefully neither would complain about $60M, $50M, or even $10M.