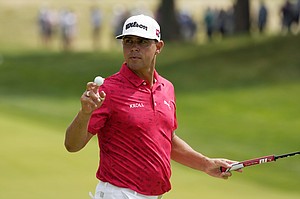 Gary Woodland reacts after putting on the ninth hole during the second round of the U.S. Open golf tournament at The Country Club, Friday, June 17, 2022, in Brookline, Mass. (AP Photo/Charles Krupa) by Matt Tait

Former University of Kansas golf standout Gary Woodland recovered from a rough start to Round 2 at this year’s Open but still dropped several spots on the leaderboard.

Woodland shot a 3-over 73 on Friday to fall to +2 for the tournament.

Nearly all of the damage came on his second hole of the day, where he recorded a triple-bogey 6 on the par-3 second hole at The Country Club in Brookline, Massachusetts.

Woodland, who won the 2019 U.S. Open, rallied with birdies at the fifth and seventh holes to finish Friday’s front nine at 1-over. But he carded a pair of bogeys and seven pars on the back nine to fall back to 3-over for the day.

At the time he finished, Woodland was in a tie for 43rd place, 29 spots down from where he ended Day 1 after shooting a 1-under on Thursday.

Woodland ended his day just six strokes behind the leader but also was just one stroke clear of the projected cut line.

If he’s able to stay on the right side of the line, he’ll stick around Massachusetts for the weekend hoping to make a run at the leaders.