Report: Ochai Agbaji invited to the green room for next week's NBA draft 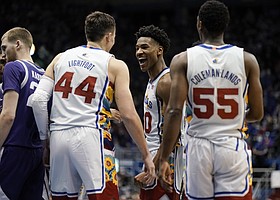 Kansas guard Ochai Agbaji (30) celebrates with Kansas forward Mitch Lightfoot (44) after a dunk by Lightfoot against Kansas State during the second half on Tuesday, Feb. 22, 2022 at Allen Fieldhouse. by Nick Krug

Former Kansas All-American Ochai Agbaji has been invited to the green room for draft night next week in New York, according to NBA draft guru Jonathon Givony.

Kansas has not had anyone invited to the draft green room since Josh Jackson in 2017. Jackson was selected fourth overall in the 2017 draft by Phoenix.

In 2018, Devonte’ Graham and Svi Mykhailiuk were both second round picks. No one from KU was selected in 2019 or 2021. And Udoka Azubuike was the lone Jayhawk drafted in the 2020 draft, picked No. 27 overall by Utah.

Most years, green room invitations are extended only to players who are likely lottery picks or who carry a high profile. I covered five NBA drafts in a row a few years back — started with Cole Aldrich and Xavier Henry in 2010 and ended with Andrew Wiggins going No. 1 in 2014 — and it was incredibly common then to have the Jayhawks, along with their families and often times KU coach Bill Self or other KU staff members, sitting at the table with them.

Scheduled for June 23 in Brooklyn, the 2022 NBA draft will have extra meaning for Kansas fans, as two starters from last season’s national title team are eligible to be drafted and projected to be picked in the first round.

Agbaji is the highest of the two in the late lottery (top 14 picks), with teammate and longtime friend Christian Braun projected by many mock drafts to be a late first-round pick.

Self said Monday that more NBA executives and general managers have called him to ask about Braun than Agbaji, but noted that that was mostly because there is a wider range of teams in position to pick Braun.

As an example, Self said he talked Monday with one GM who picks in the top three of next week’s draft and he did not ask about either Agbaji or Braun.

“Their focus is not Ochai Agbaji,” Self said. “Their focus is Chet (Holmgren), Paulo (Banchero) and Jabari (Smith). I mean, if you're picking in the top three, that's your focus.”