Realignment battle lines continue to be drawn by conference commissioners; it's adjust now or regret it later 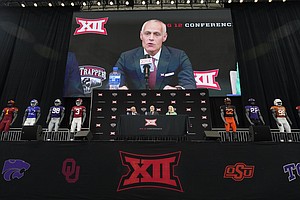 It’s musical chairs if we’ve ever seen it in the world of college athletics, with big time schools in major conferences carefully walking around the circle desperately hoping that there will be a chair for them to land on when the music stops.

While this latest round of conference realignment has brought about more wild rumors and speculation than ever before — I know; hard to believe, right? — it seems that this stretch is about much more than just teams trading conferences and mailing addresses.

College athletics is in the middle of a major shift. Rules have been erased and restrictions lightened. Players are now able to cash in on countless name, image and likeness opportunities. And rosters, in all sports, are being reshaped at the college ranks the way free agency redid the look of pro sports.

Holding on to the ways of the past will not work and it’s critical that coaches, administrators, athletes and others — think parents, media outlets, fans, etc. — show the ability to adjust to whatever it is that lies ahead.

Earlier this week, at the Big Ten’s annual media days, Big Ten Commissioner Kevin Warren said as much while discussing the conference’s expansion plans and the addition of USC and UCLA.

In short, Warren said he was not interested in closing the door on expansion and it was the adjust-or-else approach that was at the heart of his comments.

“From a strategy standpoint, this is not the old college athletics,” Warren said in a statement that sounded obvious but still seems to be hard for some to grasp. “For the individuals and the conferences and schools that are not thinking that way, they’re going to be Sears and Roebuck. That’s straight, blunt. That’s where this deal is going. We have about three or four more years of perpetual disruption. During that period, either you’re going to embrace change and build a business and get stronger, or not.”

There’s so much to unpack in that one statement. But as a whole, it’s pretty direct.

Whether you’re talking about extinction through the Sears reference or the promise of unending disruption, Warren made it clear to whoever wanted to hear it that now is the time to prepare to make adjustments, rethink the norms and get used to a new way of doing business. And, yes, business was an important word in there. 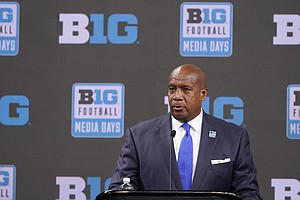 Although Warren spoke from a position of power and security, his comments were not that far off from those uttered by new Big 12 Commissioner Brett Yormark a couple of weeks earlier.

Yormark also emphasized business in his introductory remarks at Big 12 media days, and he sounded like a leader who would be willing to do whatever he needed to do, considering any and all initiatives and ideas that come his way, to ensure that the Big 12 Conference is as strong as possible as it enters this new era.

Action will matter far more than words when it comes to the Big 12’s future. But fans of the conference, as well as the 10 members currently in it, the four coming on board next year and any schools out there (Pac-12 or otherwise) that might be considering it as a landing spot in the madness, should feel good about how closely Yormark’s approach lines up with Warren’s words.

To a lesser degree, the same goes for Kansas fans and the vision and approach of second-year athletic director Travis Goff.

Both men understand that the future is not tied to the status quo or longing for the days of old. That ship has sailed. Michigan will never play USC in the Rose Bowl again. Money is undeniably king now. And many people have stopped the pretending. Four-year players, in all sports, will become more and more rare as the years pass by. For goodness’ sake, the Kansas men’s golf team just lost a key player to the transfer portal. And he transferred to conference rival (for now) Oklahoma of all places.

The powers that be are telling these kids that the time has come for them to get theirs and worry about the rest later.

The conferences that follow that advice will likely be the ones that survive and thrive in the new world.

Pac-12 Commissioner George Kliavkoff is slated to speak at 10 a.m. Friday at his conference’s media day in Los Angeles. Awwkwaaard.

Pay close attention to Kliavkoff’s words and you just might find a few clues for how much longer the Pac-12 that we know today will be around. 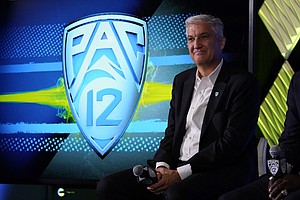 What I've seen for forever has been a reactive approach. I'm not sure what the model would be, but it would be nice to create a league that actually creates something new of value. Interesting that the Big Ten is lauding their around-the-clock menu. Add CU, UU and two more Pac schools and we'd have the same thing, right?

I want every kid to maximize their opportunities, but I'd like to see collegiate athletics look like collegiate athletics again. Can't we get The Rock to make the XFL the option for the sure-pro's? Take the 100 best high school prospects and let the XFL have them. What would you have left? Great college football. KU's greatest-ever quarterback was a 3-star recruit. Ask KSU about their greatest QB? A walk-on wide receiver. Our best DB? Well, neither Nolan or Aquib or Kwamie were considered anywhere near the top 100 players coming out of high school. Same for Willie Pless, Tony Sands, June Henley and on and on and on.

Our problem is that we tether ourselves to the past, kind of like the "Founding Fathers Fetish", but for college football. Let the best go pro. And then let's offer a free education, room, board and a percentage of revenue to the others. Not a bad deal. Win-Win-Win.

The biggest problem faced by Warren's ideas for the future is that fans of the old rivalries are gradually dying off. And the numbers will be greater than those he can attract to the new model.
The level of fandom in the younger generation is lower because there are so many other attractions for recreation and enjoyment.
TV will rue the day of this greed.

There is a thing in business called The Encore Problem.

A company must produce more this year than last.

Problem is, the potential is finite.

They will see this, but fortunately old guys like me will not have to live with their lifetime love disappearing from the scene.

5 years - Over/under - when the NCAA no longer has any authority over men's "college/semi-pro" football and basketball.

"College Athletics" is officially dead. It has become just another level of professional athletics. There is no allegiance to anything other than "self" now days. And unfortunately, football is leading this demise.

And if your rosters are changing yearly and not allowed to "mature" how long before the quality of the "product" suffers.

It seemed like a given that the Arizona schools plus Colorado and Utah were coming to the Big 12. I guess that was just media hype - or who knows it may still happen.