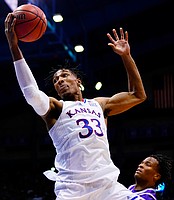 Kansas forward David McCormack (33) catches a pass in the paint during the second half on Friday, Nov. 12, 2021 at Allen Fieldhouse. by Nick Krug

Turkey-based basketball club Besiktas JK announced Wednesday that it had signed former Kansas forward David McCormack to a contract for the upcoming season.

The team, which was founded in 1967, is based in Istanbul and competes in the Turkish Basketball Super League and the FIBA Europe Cup.

McCormack, who spent the summer playing in the NBA Summer League with the Minnesota Timberwolves, joins a long list of former Jayhawks to head overseas to continue their playing careers. Many of those players have become stars and made good money while playing outside of the United States.

Five-star forward Omaha Biliew announced on Tuesday that he had committed to Iowa State.

The 6-foot-8, 205-pound power forward is ranked No. 18 overall by Rivals.com in the 2023 class. He becomes the second top-30 prospect to commit to the Cyclones in the class.

Biliew played last season at Link Year in Branson, Missouri, and also was a member of the MoKan Elite AAU program that just won the 2022 Peach Jam title in South Carolina. It marked MoKan’s third Peach Jam title in the past six seasons.

Biliew, who is originally from Des Moines, Iowa, is expected to return to his hometown of Waukee, Iowa, for his senior season.

The 2022-23 Kansas basketball team is closing in on the end of its summer workouts.

The Jayhawks are expected to finish individual and team workouts this week and the players then will be free to return to their hometowns for the rest of the summer.

KU’s fall semester is slated to begin on Aug. 22 and the Jayhawks will report back to campus by then in order to begin preseason workouts once school starts.