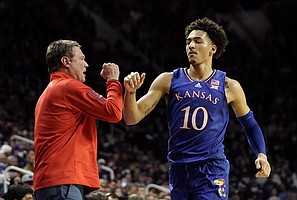 Kansas head coach Bill Self fist bumps Kansas forward Jalen Wilson (10) as he comes out briefly during the second half on Saturday, Jan. 22, 2022 at Bramlage Coliseum. by Nick Krug

In the seven weeks following his decision to return to school for his junior season, Kansas forward Jalen Wilson has been asked for his thoughts on just how good the 2022-23 Jayhawks can be.

Each time, and without hesitation, Wilson has said something along the lines of: “We’re going to be good.”

The latest such occasion came this week, when Wilson appeared on a podcast with NCAA.com’s Andy Katz to discuss the outlook for the upcoming season.

He was joined by UCLA’s Jaime Jaquez Jr. and Gonzaga’s Drew Timme — two other accomplished upperclassmen who elected to return to school for another year — and Wilson was the first in line given his status as a defending national champion.

In addition to answering Katz’s question about how good these Jayhawks can be with that familiar answer — “we’re going to be good,” he said again — Wilson was asked what had stood out to him so far in KU’s offseason practices.

That answer was easy to find, as well.

“Every day I’m seeing glimpses of what we can be, a very fast team, athletic team, a good scoring team, as well,” he told Katz. “I’m getting looks of kind of just a team that’s going to be up and down (in terms of) how we like to play.”

More than that, Wilson, who along with Dajuan Harris Jr., is by far the most experienced player on KU’s 2022-23 roster, said he was most energized by the hunger and passion he has seen so far from newcomers and returners alike.

“(We have) guys who are willing to learn, no matter if they’re All-Americans or not,” he said. “Everyone’s in here willing to learn from each other, and once we have that mindset I feel like all we can do is grow. … I’m seeing a lot of good things and it’s only, what, July?”

Earlier this summer, shortly after announcing his decision to return to KU, Wilson was asked what he thought of the roster that will be tasked with defending the 2022 national title.

Although it features all kinds of new faces — and several missing faces, as well — Wilson showed then that his expectations for this group would be high.

“I think it’s really good,” he said of the KU roster. “You look at the young guys, you look at the guys who were already here with us last year, I think there’s a lot of potential.”

Host @TheAndyKatz talks with Jalen Wilson of @KUHoops, Jaime Jaquez, Jr. of @UCLAMBB and Drew Timme of @ZagMBB about their decisions to delay their NBA pursuits and return to college basketball.

by Inside the NCAA

A lot of potential.

Good that he is noticing the guys being willing to learn. What seemed to be a common phrase in the last month or so of last year was “doing the little things”.

I think I first recalled hearing it from Remy shortly after returning to play. It seemed to build on the early season response to lower scoring of “I just want to win”.

I just want to win leads to listening to coach and doing the little things that results in improved O and D (even if it’s not perfect.)

Matt - Have you heard anything about the Big12 and ND creating a package deal with nbc so that ND can stay independent and provide tier 3 content through the peacock?