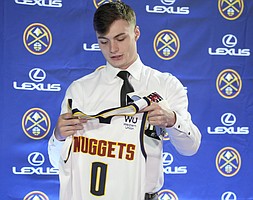 One of the Denver Nuggets' selections from the NBA Draft, Christian Braun, looks over his jersey after being introduced to the media during a news conference Monday, June 27, 2022, in Denver. (AP Photo/David Zalubowski) by Matt Tait

Former Kansas guard Christian Braun was solid in his debut with the Denver Nuggets’ Summer League team earlier this month after being selected by the team with the No. 21 overall pick in June’s NBA draft.

In addition to showing off his all-around game and the always-on approach that made him an all-Big 12 performer and national champion at Kansas, Braun’s impact extended to the bench, where he showed that he’s capable of talking a little trash from anywhere.

Intentionally held out of the Nuggets’ final Summer League game in Las Vegas, Braun and Summer League teammate Colin Gillespie — a former Villanova All-American — were both mic’d up by the Nuggets for the contest.

In addition to showing the type of intensity and passion on the bench that the two typically show on the court, Braun demonstrated just what bragging rights look like at the next level.

Late in the 90-second video posted to Twitter of their bench experience, Braun shifted abruptly from talking about a player who Gillespie once faced in college to their matchup in the Final Four in New Orleans a few months ago.

“Remember when you (were) about to go to the national championship game and then you went home, back to Philly,” Braun asked Gillespie with a slight grin surfacing on his face.

To his credit, Gillespie handled the exchange like a champ, saying simply, “It’s fine; I already had one.”

The entire video is worth the watch, mostly because almost every mic’d up situation ever recorded has resulted in pure entertainment. But that particular exchange will likely be of the most interest for Kansas fans.

Braun and Gillespie, who joined the Nuggets as an undrafted free agent on draft night, started together during a handful of Summer League games for the Nuggets and it’s clear that the two became fast friends and productive players.

It remains to be seen how much more they’ll have the chance to play together with the Nuggets, but the chemistry is clearly there.

The Nuggets’ official team Twitter site even teased the potential for the two newest teammates to star in their own reality show. That won’t happen, but don’t be surprised if both players find a way to impact the Nuggets’ push for a championship in the years to come.

Braun is expected to compete to be a regular part of the Nuggets’ rotation next season. Gillespie, meanwhile, signed a two-way contract with the team and likely will split his time between Denver and Grand Rapids, Michigan, home of the Nuggets’ G League affiliate, the Grand Rapids Gold.

Overall, Braun averaged 11.8 points, 6 rebounds and 4.5 assists per game for the Nuggets during his first Summer League stint.

Petition to get @Ballin25Braun and @Colling1021 their own reality show 📋 pic.twitter.com/kPQ7SgnF91

That is awesome! CB is going to kill it!