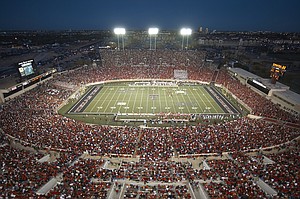 No Big 12 football program has finished closer to Kansas at the bottom of the conference standings more consistently during the past decade than Texas Tech.

Yet there the Red Raiders were on Monday night, announcing plans for a $200 million stadium renovation project in Lubbock, Texas. That massive sum of money will go toward a new south end zone building and the construction of a brand new football center connected to it at Jones AT&T Stadium.

Considering the state of college athletics and the frightening reality tied to the latest round of conference realignment, now sure seems like a good time to announce the largest individual capital project in Texas Tech athletics history.

If that doesn’t underscore the importance of Kansas finally figuring out its stadium and facilities conundrum, it’s hard to imagine what else will.

Unless, of course, you count all of those KU fans and Lawrence residents holding out hope that the Jayhawks will one day wind up in the Big Ten.

A spot in one of the two most coveted conferences in college football’s Power 2 future might be a long shot to begin with for Kansas.

But it’s also a move that KU, like just about every other school in the country, would make without hesitation.

And it probably won’t happen unless Kansas can make — or at least show — some serious progress on a stadium project that is a decade or more overdue and has been hampered as much by the revolving door of head coaches and athletic directors as anything associated with the school’s athletic department in that time.

The Texas Tech announcement on Monday night was accompanied by a sharp social media rollout and it included all kinds of renderings and reasons behind the move.

In short, their goal, stated or otherwise, is to “construct what will be the premier football facility in the Big 12 Conference and nationally,” according to AD Kirby Hocutt, who said simply that the new facility, when complete, would not take a backseat to any other school in the country.

“It’s going to elevate our position, our commitment and ultimately the success that we have,” Hocutt said Monday of the project that was developed by Kansas City-based design firm Populous, which has been no stranger to conversations with KU during the past decade.

Heck, there was even a 30-minute, in-house video — or announcement show, if you will — that included interviews with Hocutt, a few Texas Tech players and new head coach Joey McGuire.

We might be mixing sports here, but the Red Raiders definitely shot their shot. And anyone who thinks that the timing of Tech’s announcement was merely coincidental has not been paying attention. Whether Texas Tech is suddenly more attractive to either the Big Ten or the SEC is anyone's guess and remains to be seen. But this latest move certainly does not hurt.

This is precisely the kind of commitment and splash that people have been waiting for Kansas to show. Don’t get me wrong, efforts have been made toward this end. But each one fell apart after another failed football coach or following another change in leadership at the top of the athletic department.

Now it’s Travis Goff’s turn. And before you jump out of your chair and say that what Texas Tech did on Monday is exactly what Goff should have done before then, remember for a moment that he’s been the AD at Kansas for all of 15 months.

It’s fair to start the clock, but give him some time. If he doesn’t get it done, then you can chastise him along with all the others.

There is no doubt in my mind that Goff understands the importance of the football stadium and facilities upgrade. The start of the latest and most intense round of realignment only made his grasp of such a thing clearer.

It also may have pushed up the timeline a little.

During an interview with the Journal-World this spring, Goff noted that getting it right this time would be “critical.”

He also said that he wants whatever KU does with its football facility — the general expectation is that the price tag on a full renovation will be at least $350 million (and rising each year) — to hold up over time and be of value to both the university and the community for decades to come.

That’s all well and good, and in a perfect world, carefully constructing just the right approach and picking the right time to roll it out would make a lot of sense.

But Goff and Kansas may not have that luxury any longer. That’s not to say they have to break ground tomorrow, but if this was going to be a project that unfolded in phases anyway, they’d be wise to get Phase I on the books as soon as humanly possible.

And they shouldn’t be afraid to take a page out of Texas Tech’s playbook either.

If it’s commitment to football that Kansas fans and critics alike want to see, the leaders at KU might as well be willing to shove it in their faces.

A stadium is not gonna put Texas Tech in the SEC or Big 10, a market will do that. They have a very small market and would be takers for big conferences more than givers. I’m glad they are giving it the old college try though. Kansas has a much bigger market than Tech.

Lubbock TX tv market is ranked 145, Lawrence which is part of the Kansas City market is ranked 31. KU dominates the KC market. Tech does not have a national following and building a stadium is not gonna change that.

Out of curiosity, where does the Manhattan, KS market rank?

It’s the largest contiguous facility because of a sky bridge that connects the stadium to the indoor practice field and other facilities.

The have and havenots can really be seen in the stadium seating.

As pretentious as ttu’s comments seem, Matt’s point in the article is on target. We do need to update/replace the majority of the stadium, though there’s no reason to do that until we come close to filling what we’ve got. We won’t fill the stadium until a year or so after we start putting a competitive team on the field. It will take a decade of success to create a tradition of Saturday’s at the game.

If we knew for sure we are staying in the Big 12 then I could agree with needing to fill the seats first. But, if the Big 12 implodes, we need to at least have begun what it takes to make ourselves more attractive to one of the P2 conferences. TT may be a small market but they still see they need to do what they can to be more attractive. That plain high school girl doesn't wait for the boys to pay attention to her before she has a makeover. The idea here is not to renovate the stadium to draw more fans as much as it is to do more to make ourselves desirable to future suitors.

Good information. I too would love to see Memorial Stadium refurbished but it will be a hard sell asking anyone for $200MM (or whatever the number is) if you're at or near the bottom of the conference every year. Be competitive, win a bowl game, then ask for big money.

One look at Memorial Stadium is all a big-time prospect needs to understand that KU is not serious about football.

It would be easy to for all the numbers just be a bunch of noise. The key to consider is whether a team is going to be value added to the conference or dilute the assets. Where does the team rank relative to the conference average? If it’s below average it’s not value added.

There isn’t another team that is a value added program to the SEC or Big10, and it doesn’t matter how big TTUs facilities are.