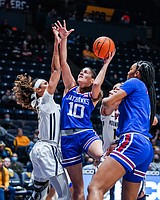 Based on the way they have navigated their most successful season in more than a decade, the members of the Kansas women’s basketball team probably weren’t all that bothered by not being ranked when the new Associated Press Top 25 came out on Monday.

Good for them. It's been clear all season that they have bigger goals in mind.

For the second week in a row, KU was near the top of the list of others receiving votes when the new AP poll came out on Monday afternoon. KU received 39 points this week — 21 more than last week — and missed out on a spot in the top 25 by just five points. Georgia sits at No. 25 in the latest poll with 44 points, just ahead of Oregon and KU.

However, it sure seems like this team is worthy of a top-25 ranking.

Whether Brandon Schneider’s team truly is one of the 25 best programs in the country this season remains to be seen. And it looks as if the KU women will get the chance to prove that in the postseason.

At this point, with 10 Big 12 wins, a 19-5 overall record, a seven-game winning streak and just four games remaining in the regular season, Schneider’s team appears to be in good shape for an at-large berth in the NCAA Tournament. Nothing is guaranteed, of course. And the Jayhawks’ overall resume may leave them with some work to do. One more win seems like it would do it, though, putting the Jayhawks on the brink of their first trip to the NCAA Tournament since 2013.

As Kansas basketball fans know all too well, that’s where performance matters. Not in some poll in the middle of the season.

As was the case this week, the Jayhawks were the second team listed in the “others receiving votes” category a week ago. They also received votes in the poll on Jan. 17 and Jan. 24. The longer you hang around that space, the more likely you are to jump into the top 25 if two things happen: 1. You keep winning. 2. Teams ahead of you lose.

Both things happened last week, as the Jayhawks picked up two wins — at home against West Virginia and at Texas Tech. Beyond that, four of the seven teams directly in front of them in last week’s poll lost once.

Here’s the problem: One of those losses was by unranked Oregon to No. 2 Stanford and another was by No. 23 Virginia Tech at No. 3 Louisville. Hard to call either of those outcomes bad losses.

A third loss in that group came from No. 22 Iowa, who fell to 13th-ranked Maryland. But the Hawkeyes also defeated No. 5 Indiana last week, so that's a bit of a wash.

When you look at it that way, it’s tough to see how KU could have jumped any of them.

If there’s one argument to be made there, it’s with Florida Gulf Coast, which plays in the Atlantic Sun Conference and is ranked No. 38 in the latest NET rankings. Kansas is holding steady at No. 35. The other five teams immediately ahead of Kansas in last week’s poll are all ranked No. 22 or higher in the NET rankings.

There is good news for Kansas, though, in its quest — actual or perceived — to join the AP poll for the first time in nine years. KU’s final four foes before the Big 12 tournament are all ranked in the Top 20 of the AP poll.

Beat them and you’re in — both the AP poll and the NCAA Tournament. No questions asked.

As Matt says (or implies), all of the ranked teams in the 3 or 4 spots just ahead of KU either won or had explainable losses last week, so it would have been tough to climb the ladder absent any signature wins. So, the Jayhawks are effectively ranked a not all that shabby 27th in the nation.

Another reason they're not ranked higher is simply due to the low expectations going into the season. If they'd been ranked say 15th in the preseason, they'd probably have been able to hold that approximate ranking throughout, maybe even move up a little.

As much as we want to see a strong finish to the season, including some wins in the NCAA Tournament, the real story, to me anyway, is that Coach Schneider (last week's ESPN Coach of the Week) looks to be building what may turn out to be a perennial powerhouse program. That may be dreaming just a bit, but the team is almost certain to be stronger next season, and maybe a lot stronger. If the stars line up just right, they could make a run at a top 5 ranking. For that matter, it's not impossible this year.

The real headscrather to me is the coaches’ poll. Last week we had only one vote total. Dead last. I appreciate the explanation in this article but

But not sure there’s a reasonable explanation for nothing from the coaches.

Top two teams this week, then the 4th and 4th place (defectors) next week.