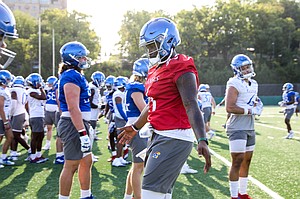 It came off as a joke because Leipold had basically said as much one day earlier. But the declaration is no laughing matter for Kansas fans, who have become accustomed to waiting until the first snap of the season to find out the identity of the team’s starting quarterback.

Leipold knows the history. And he also is not the type of coach who makes moves because of it.

So you can be sure that if he said this week that he expects Daniels to start Week 1 for the Jayhawks, it’s because he means it.

Daniels still has to get to the finish line. And there’s been no indication that he plans on letting up because of his lead in the QB battle. But if he gets there, he’ll be the first Kansas quarterback since Montell Cozart in 2014 to start a season after being named the starter well in advance of the season opener.

That year, Cozart won the job during the spring. Since then, it’s been a serious stretch of who’s-it-gonna-be questions for Kansas fans and the team’s QB.

Cozart was the starter again in 2015 but did not know it until two weeks before the season opener. He started the season opener for a third time in 2016 but was not officially named the guy until game day in Week 1.

It was another game day announcement with Peyton Bender in 2017 and Bender won the job in 2018 during the third week of preseason camp.

Carter Stanley was revealed as the starter at kickoff of the opener in 2019, and Thomas MacVittie — remember him? — was announced as KU’s starter during the pregame festivities in 2020.

Last season, current Jayhawk Jason Bean officially was named the starter about 6 hours before kickoff in the season opener.

So even though Leipold’s claim that he expects Daniels to start Week 1 this season is not exactly the same as him officially naming him the guy, it certainly qualifies as rare territory by Kansas standards.

The decision to add to the momentum of Daniels’ strong finish to the 2021 season, along with the fact that the fan base can spend the next few weeks anticipating the play of KU’s starting quarterback instead of wondering if the Jayhawks even have one, can only be good for the program as it continues to battle through its latest rebuilding effort.

Offensive coordinator Andy Kotelnicki said identifying a starter at any position — but especially quarterback — this early in camp was a great sign.

Kotelnicki said Daniels being pegged as an early answer at the game’s most important position was another sign of progress within the program.

“One of the things we’re trying to do here is definitely not have anyone start by default,” he said. “We always want to have competition. When you see that two people are competing in a healthy way, that trickles into all the positions on the football team in all three phases.”

And that leads to confidence. Daniels is nothing if not confident, and he, as well as several of his teammates, believe that they’re on the brink of something special.

Confidence is a key part of winning football games for any team, and it might be the biggest factor in how big of a step these Jayhawks can take in the months ahead.

A home win against Tennessee Tech is a must. After that, it’s two tough road games at West Virginia and Houston. A win in either game — or even just a solid showing in one or both — could grow the team’s confidence. Blowout losses could cripple it.

We’ve seen that movie before. But getting a glimpse at the KU starting QB this far in advance is relatively new.

It should be fun to see if that makes a difference.

That third-to-last paragraph really hits it. Of course, Daniels must play well to keep his job, but that three-game stretch to open the season is pretty important. So sending a message to the entire team, so that they can settle in, is a good way to go.

I would stretch it to 4 weeks. We need to be at least 0.500. WVU and Duke will be the real barometers of how much progress we’ve made. I believe both lost a lot of players in the portal. We obviously did also but still seems like a big net gain; 3’s and 4’s being replaced with 1’s and 2’s.

I agree that a win over Tennessee Tech is a "must win". KU cannot afford to be looking ahead. As the old saying goes, "take them one game at a time".

That being said, out here in West Virginia, I just got tickets for the game in Morgantown on Sept 10. So, I am already "looking ahead" to that clash, which will be an early season litmus test of KU's predicted improvement.