Why, and how, new Kansas basketball commitment Chris Johnson reminds me of a current Jayhawk 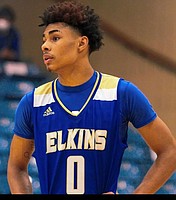 New KU combo guard Chris Johnson has a lot of Jalen Wilson in his game. (Contributed photo) by Matt Tait

I have yet to see new KU commitment Chris Johnson play basketball in person, but watching his highlight clips showed me everything I needed to know.

Big, physical, tough and fearless, Johnson plays a brand of basketball that is similar to the way Wilson plays. Give him another couple inches and 30 pounds and you might think you’re seeing double.

You wouldn’t be alone either. Johnson told me Wednesday afternoon that even his own mother, Sheryl, has drawn the comparison between the current and future Jayhawks.

“My mom says he and I look like twins,” Johnson said.

Maybe the hair style or the demeanor or the unrelenting confidence led Sheryl to that conclusion. But it’s definitely the game, as well.

Don’t get me wrong, you’re probably not going to see Johnson playing the 4 for the Jayhawks any time soon. But much in the way Marcus Garrett could hold down that spot when asked during his college days, it’s not out of the realm of possibilities.

Johnson’s a guard, though. And a good one. By the time the rankings in the 2023 class are finalized, I fully expect him to jump into five-star territory.

The comparison between Johnson and Wilson, at least in my mind, is 100% tied to how physical both players are. Johnson said Wednesday that he loved to play defense and liked to use his physicality on that end so the players he’s guarding are sure to feel him when he’s out there.

Wilson has uttered similar words in the past, more about his rebounding and relentless desire to turn the corner and get to the basket, which, by the way, Johnson’s pretty good at doing himself.

One of the things that attracted Johnson to Kansas was the fact that Bill Self and his staff have shown in recent years that they’re willing — and may even favor — to play a positionless style of basketball.

Guards and wings all over the floor. Whoever gets it off the glass brings it up. Shooters and athletes with Kansas across their chest spreading the defense and creating driving lanes for each other, with the defense never really sure where the point of attack will be.

All of that fits perfectly into the style that Johnson feels most comfortable playing. And that’s what makes him as good of a fit for the KU program as any I can remember Self landing in recent years. Plenty of guys have developed into exactly what the Jayhawks needed them to be after they arrived on campus. But few were as ready, from a stylistic standpoint, as Johnson seems to be. Devon Dotson was one. Josh Jackson was another. And maybe a big guy or two.

It’s unlikely that Johnson and Wilson will ever play together for the Jayhawks. But don’t be surprised if the staff brings more players in just like them in the years to come.

Whether they fit the twin billing will be up to their mothers. All the coaches care about is that they can play. And Johnson, like Wilson — another Texan, by the way — has that part down already.

I thought you might say Kevin - a big guard, with nice passing abilities that needs to work on his 3pt shot. It would be great if Johnson ramps up his D to a consistency of Kevin’s so that others will comment about it more than he would need to.