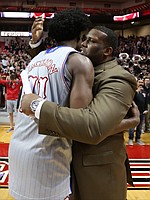 Kansas guard Josh Jackson (11) gets a hug from assistant coach Jerrance Howard as he leaves the floor following the Jayhawks' 80-79 win over Texas Tech, Saturday, Feb. 11, 2017 at United Supermarkets Arena in Lubbock, Texas. by Nick Krug

Former Kansas basketball assistant coach Jerrance Howard has resigned from his position on Chris Beard’s staff at the University of Texas, according to a report from Brian Davis of the Austin American-Statesman.

Howard played for KU coach Bill Self at Illinois and worked under him at Kansas for eight seasons before leaving for Texas in April of 2021.

Howard played a key role in recruiting during his time with the Jayhawks and was equally as important to the Longhorns’ recruiting efforts during his one season in Austin.

The 42-year-old native of Peoria, Ill., was named one of college basketball’s “40 under 40” most influential figures by ESPN following the 2019-20 season.

Davis’ report noted that Howard had “wiped all UT references from his Twitter account” and also did not respond to a message seeking comment. A UT spokesman told Davis that Howard “has been pursuing other opportunities.” Davis reported that Howard’s name also had been removed from the UT directory.

Those who knew Howard at Kansas knew that he wanted to be a head coach one day and had looked into potential head coaching openings in the past.

Whether that’s where his departure from UT leads or if he stays in the coaching profession at all remains to be seen.

Howard responded to a text message from the Journal-World on Thursday night by saying he would share information about his next step soon.

Thrilled to have Jeremy Case. Best change on this staff in a long time.

It's legal in IL.

This is very strange. I hope his departure is not due to any medical condition or serious health concerns. Situation will unfold in time.

"Howard joined Beard’s staff last season after Beard was hired from Texas Tech, but has been off the road since June and is planning to become an agent, according to reporting from Inside Texas." SB Nation

UT had just recently hired an assistant coach after another recent asst. coach departure.
Howard off road since June? And crickets until this announcement more than five weeks later???
Hopefully he was not an "agent" while with KU.