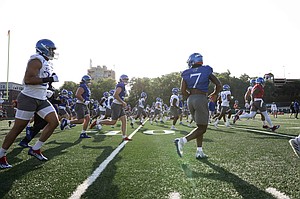 The Kansas football team stretches during the first day of practice on Tuesday, Aug. 2, 2022. by Chance Parker/Journal-World photo

Earlier this month, I was asked what the Kansas football team would have to do during the upcoming season to capitalize on the momentum it captured down the stretch in 2021, Lance Leipold’s first season in charge of the program.

Most fans want to point to a win total when asked this question. But, for me, the answer is tied to everything but the number of wins KU has at the end of the season.

There’s no question that the players have bought in fully and are putting in the work it takes to actually enjoy the fall for a change.

Beyond that, the talent level is up, depth exists at most positions and the vibe within the program is one of confidence, hope and optimism.

There’s a lot to like about this Kansas football and a lot of questions, too. But all of those things above are signs of a program headed in the right direction.

Here are three things the Jayhawks need to accomplish during the upcoming season to keep it that way, win or lose.

The early portion of KU’s schedule is far from ideal, but it does still feature the two most winnable games of the season — on paper — in the first four weeks.

If the Jayhawks hope to convince their fans that things have changed, a 2-2 start or better is absolutely crucial.

Winning at either West Virginia or Houston in Weeks 2 and 3 is a big ask. But handling business at home in Week 1 against Tennessee Tech and Week 4 against Duke isn’t. Taking that one step further, the Jayhawks need to open with a bang, putting a big win on the board in the season opener to drum up excitement and capitalize on the good vibe that already seems to exist with the fan base.

Beyond that, a 56-10 drubbing of Tennessee Tech in the opener also would do wonders for this team’s confidence before it heads up to Mountaineer country in Week 2.

West Virginia has talent and the Mountaineers are in their fourth season under head coach Neal Brown, so there is a bit of stability there. But Brown has yet to win more than six games with WVU and his team was picked to finish eighth in the preseason coaches poll, so it’s not impossible to think KU, if riding high, could go up there and make it a game.

Doing so, win or lose, would be huge for the rest of the Jayhawks’ season, just like a strong start will for the program’s overall momentum.

For years now, Kansas football has been one giant mishmash of guesswork, failed attempts and bad football. Whether that was the result changing offensive philosophies or continually turning over the head coaching position and faces on the field, it’s been hard to identify one thing the Jayhawks are about and try to hang their hats on.

If nothing else, this group can set that bar, and Leipold said recently what he would like it to look like.

“I think you want to be physical on both sides of the ball, especially in the trenches,” he began. “You want to be a team that is disciplined and executes in a way that we showed flashes of last year, one that’s not going to beat itself. And play consistently and consistently hard through the game, giving (yourself) a chance to win in the fourth quarter.”

Leipold admitted that the approach outlined above is one that’s not that different from what most teams try to use and not all that complicated or original. But it’s exactly what Kansas needs.

Much in the way KU basketball coach Bill Self has created a culture that’s about defense above everything, Leipold and this football program need to find their calling card.

Consistency is the one-word answer Leipold uses when asked that question, and if this team can at least be consistent in 2022, that will be viewed as another positive step.

With expectations still in check and the building process still ongoing, this is the perfect year to establish what Kansas football is about and is known for and to do it in a way that the players and fans believe in and the rest of the country can see clearly.

Last year, KU’s strong three-game stretch to close out the season, which included that wild win over Texas, came against teams that finished sixth, seventh and eighth in the final conference standings.

The signs of life were welcome and the progress was real and easy to see, but just one of the three teams (West Virginia) went to a bowl game and none of the three finished 2021 with a winning record.

In that way, the schedule set up pretty well for the Jayhawks to have that kind of finish. If they turn in a similar finish this season and play some of their best football on the back end of their schedule, I think we’ll have a better grasp on just how much progress has been made.

The month of November includes home games against Oklahoma State and Texas and road trips to Texas Tech and Kansas State. Winning any of those games would be massive. But even just being competitive in all of them could be just as big, given the strength of the teams on that list. Oklahoma State was picked third in the preseason poll, Texas fourth and K-State fifth.

Actually competing with those types of teams to close out the season — K-State, most notably — would be a huge lift heading into the offseason and would set the bar and expectations way high entering 2023.

2021 played out much as I expected. In some regards, it was the second year in a row we started the season without the benefit of spring ball. Last year, September was essentially spring ball. The fact that their play improved was the right sign.

This year, we get two of those 1 possession L opponents from the end of last year to start the year. I get reputation and we’re building from the bottom, but striping away all that noise, the question to me is have we improved more than WVU and TCU?

In some ways it’s similar to Miles first year. The roster wasn’t significantly different than the previous year. The previous year, there were multiple games that I thought we should have, could have won with better game day coaching. The fact that our record didn’t improve with presumably better coaching was disappointing and further compounded the following year. The fact that we improved last year was encouraging. I think we’re more than one score better this year. +10?

You expected the win at Texas did you?

Huge positive last year was the lack of penalties. That needs to continue. Is there another stat like that that shows good fundamentals regardless of the score?

Why KU will win in Morgantown.

DIsciplined and prepared teams have the advantage early on in the season. We will have a mental edge.

Year 4 is going to be Browns last year. They expect better. The pressure will be on and the culture is not improving there.

We will win the turnovers and our run defense will be vastly improved.

We will win a minimum of 5 games.

Espy has us at the bottom of the B12, 3 wins, 1 in conference. Sounds about right.

I agree with you Matt TnTech and Duke should be wins. I think Coach is still another year or two away of having the team he wants. His 1 conf. win will be harder to find. Maybe TT or TCU who knows. If he can get 4 wins That would be outstanding.

Matt any update on the where the sunflowers will be on our uniforms?