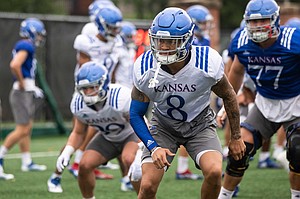 This story was updated on Monday, Aug. 22, 2022, to reflect Kwamie Lassiter II's performance in the Bengals' second preseason game of 2022.

For most of their childhood, brothers Kwamie Lassiter II and Kwinton Lassiter dreamed of one day playing in the NFL and following in the footsteps of their late father, Kwamie, a former standout safety at Kansas and with the Arizona Cardinals, San Diego Chargers and Los Angeles Rams.

And then the other day, Kwinton saw a short video clip on Twitter of his older brother catching a pass from Joe Burrow at training camp with the Cincinnati Bengals.

“I didn’t even realize it was him at first,” Kwinton said during KU’s annual media day session at the team’s indoor facility on Wednesday.

The catch was like so many the middle Lassiter made at Kansas. It came after a perfect route, was caught in traffic and helped Burrow’s offense move the sticks.

There remains a long way to go for the undrafted wideout who led the Jayhawks in receiving last season to earn a spot on the Bengals’ 53-man roster or even the practice squad, but Kwinton believes his brother is right where he belongs.

So does Kansas coach Lance Leipold, who is friends with Burrow’s dad, Jim.

“He sent me a text that Kwamie was doing really well and he said Joe likes him and that’ll be good,” Leipold said Wednesday of Jim’s recent message.

Although none of his catches came from Burrow, who did not play, the older Lassiter brother led the Bengals in receiving during their second preseason game of the season on Sunday night. He hauled in seven receptions on seven targets for 91 yards in the Bengals' 25-22 loss at the New York Giants in the team's second-to-last tune-up before the regular season.

Regardless of how much he and his family believed that Kwamie would get his chance in the NFL, Kwinton admitted that hearing things like that and seeing his brother catch a perfect pass from a Heisman Trophy winner who led the Bengals to the Super Bowl last season was still something to celebrate.

“I talk to him every day and knowing that he’s catching balls from Joe Burrow is real cool,” Kwinton said. “He’s working hard. He was meant to be there, though. Everything he’s doing right now he worked for. That’s just part of his story. I think it’s very cool that he’s playing in the league and working hard to earn a spot on the team, but it’s nothing that surprised me.”

As for his own plans at Kansas and beyond, Kwinton, who wears the same number his brother and father wore (8), said he, too, is just trying to earn the opportunity to contribute in some way.

Whether that’s in the secondary or on special teams — Kwamie continues to emphasize the opportunity that exists on special teams — he’ll be happy with whatever comes his way. The chance to represent his family and the Jayhawks simultaneously is already a dream come true.

“It means a lot,” Kwinton said. “It’s just the legacy. The Lassiter legacy. Knowing that my dad was here, my brother was here and now I’m here, it’s amazing.”