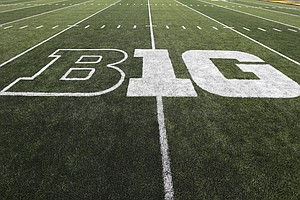 The Big Ten logo is displayed on the field before an NCAA college football game between Iowa and Miami of Ohio in Iowa City, Iowa., on Aug. 31, 2019. The Big Ten announced Thursday, Aug. 18, 2022, that it has reached seven-year agreements with Fox, CBS and NBC to share the rights to the conference's football and basketball games. (AP Photo/Charlie Neibergall, File)

The Big Ten, in conjunction with television partners CBS, NBC and FOX, agreed to a 7-year, $7 billion media rights partnership that will begin in 2023 and run through 2030.

The deal is the largest in the history of college football and it further cements the conference as the king of the castle in all of college athletics when it comes to broadcasting dollars.

According to reports, the powers that be who brokered this deal believed this kind of money could be there even before the conference added USC and UCLA earlier this year. Once it did, therein bringing in the Los Angeles market to the conference’s already vast footprint beginning in 2024, it became a no-brainer that big money was on the way.

This deal, among other things, is the biggest reason why so many universities on the outside looking in have tried to position themselves to become more attractive to the Big Ten should it desire to expand further.

As it stands today, the Big Ten will grow to 16 members when the two L.A. schools join, and it’s entirely possible that the conference could look to add more — be it one, two or four schools — in the not-too-distant future.

This kind of money makes anything possible, and only further enhances the desire for everyone not already in the Big Ten to at least explore whether there’s any way they can join or be invited.

Universities in both the Pac-12 and Big 12 have been linked to potential Big Ten expansion, and there’s still independent power Notre Dame, which has its own television deal with NBC.

As for what this deal changes for Kansas, the answer may be very little.

KU still should do everything in its power to make itself an attractive option for the Big Ten — major improvements across the board with football will be the key here — and, short of getting in, Kansas should be as proactive as possible in positioning the Big 12 to be the third best conference in the Power 2 world.

Those two things were present before Thursday and will remain important well into the future.

Here are my three biggest takeaways from the news about the Big Ten’s 7-billion-dollar deal:

• At roughly $1 billion per year in Tier I television revenue, there’s more than enough money there for the Big Ten to expand. Whether it wants to or not is akin to the Big 12 deciding it preferred to split the pie just 10 ways for the past several years instead of just expanding to expand. But there’s no doubt that the money is there. Once the Big Ten adds the two Los Angeles schools to get to 16, the math works out to $62.5 million per member. Again, that’s just for Tier 1 television dollars. The overall haul per school likely will be much higher than that with College Football Playoff dollars, NCAA Tournament money and Tier 3 rights also factoring into the big picture. Even when just considering the football TV money, though, that $62.5 million payout is roughly $20 million more than the Big 12 paid out in 2021 when it distributed a conference record $42.6 million to its 10 members. If the Big Ten wants to add more schools, money will not stop them. At 18 teams, that $1 billion pie becomes $55.6 million per school. And expanding to 20 teams — which likely is KU’s only shot of getting into the Big Ten — still leaves the payout at $50 million per school. There’s also the reported escalator clause in the deal, which allows for compensation to grow if the conference expands. Without having seen the contract, the guess here is that clause creates a cushion for expansion that would make room for each member to receive roughly the same amount ($62.5 million annually) that the 16 schools are slated to receive as of today.

• While the money is massive, the more interesting part to me is the television windows Big Ten games will fill in the future. There’s a standing Saturday night game, a Friday night option and countless other Saturday afternoon and evening games. Big Ten Commissioner Kevin Warren told the Associated Press the structure was modeled after NFL Sundays, with three consecutive games shown on three separate networks, and that’s a reminder that, like the NFL on Sundays, the Big Ten has plans to dominate and saturate the space. ESPN is not involved with the conference, so there will still be plenty of time slots for the rest of the conferences, but the Big Ten will dominate network cable.

• The exact dollar value of the new Big Ten deal may not have any direct significance to the ACC, Big 12 and Pac-12 — we all knew they weren’t going to be able to keep up with the Big Ten and SEC anyway — but it’s still a scary time for those conferences. Here’s why. I read somewhere the other day that the Big Ten and SEC could be interested in expanding to the point where they relegate those three other Power 5 conferences to Group of 5 status. If both went to 20 schools, therein taking the 10 best from those other three conferences — six to the SEC and four more to the B1G — it would leave those other conferences looking a look like the American or Mountain West. That, so I’ve read, would open up the potential for the Big Ten and SEC to take up to 90-95% of the College Football Playoff money on a yearly basis, bringing to reality those conference’s dream of creating their own exclusive club that dominates financially and competes for the national title each year, outside of whatever the NCAA may or may not want to see happen. It’s possible that Kansas could crack that list of 10, but here’s a quick list of the schools that are all but certain to be on it, be it for the strength or their football, the size and splash of their media market or a combination of the two: Notre Dame, obviously; Clemson, Florida State, Miami, North Carolina and Virginia from the ACC; and Colorado, Oregon and Washington from the Pac-12. That leaves a long list of other schools fighting for the final one or two spots. Again, that’s if both the Big Ten and SEC elect to expand to 20, but that’s still not good odds. Kansas is probably on that list, along with Arizona, Stanford, Louisville, possibly Boston College, TCU, maybe Texas Tech and West Virginia, Houston and Central Florida.

I use to be in the "ABANDON the Sinking Ship" category.

There's NO winning, other than the selling of one's Soul to the DICTATORSHIP Conferences for MONEY........

Watch and see where Bevo & Boomer both end up after all is said and done (all for the love of MONEY).......

It's a good thing Vanderbilt joined the SEC back in the beginning stages of the SEC.

Otherwise, they wouldn't stand a snowball chance in "HELL" of ever joining such a Conference.

What is wise about this is that they are on three broadcast networks. In most major cities, no cable required. More and more and more people are dumping cable - I haven't had it in five years. And KU, by being in conference number three, will be destined to be on the network that people are walking away from each and every day.

Many years ago, boxing killed itself by going strictly to a PPV model. The fighters got rich, the sport suffered tremendously. The average Joe couldn't watch the best fighters, so he just quit watching. Cable isn't dying tomorrow, but it is shrinking - ESPN is fine for now, but it is not where you want to be long-term.

Is this deal to televise football only or is basketball, and some other sports, included in this?

Brett - Agreed. Isn’t baseball basically this way also now? I don’t know for certain. I just rarely watch. Too much other fun to have. About the only nfl I watch is the Sunday night game, or maybe if there’s a game on when I come in to eat. Use to enjoy MMF, but as you said, that’s extra cable.

If the NC becomes inbred, it could become less and less significant. Part of the beauty of March is that it is so inclusive.

Thank you for the update Matt...I think we will be invited if our football program improves..on another topic...I love the football stadium...the old relic is a living history ...just like Allen and we should keep it just the way it is...as you approach from the north...you can feel the history at that end of the stadium....keep the bench seating...and continue to rent seat backs...great tradition..Big 10 loves tradition..we have it here...and it should be one of our selling points....the buzz of gameday is returning here for the first time in a very long time...I can feel it...I have a really good feeling about this program....we always need upgrades in facilities...but lets not ruin this magnificent piece of history...preserve the stadium and do not change anything..in fact give it/return it.. to more of an old school look....built in 1921... 100 years...Wow!!...what we have is so special...future generations need a window into the past...along with the Phog...we are lucky to have it here ..living..breathing history.

What is the voice you hear, Build it and he will come, Ease his pain, Go the distance?

You are right about one thing, either it keep it vintage, or get something brand new. Do not make the same mistake on how Soldier Field in Chicago was remodeled.

Brett, Dirk, Channels based in cable, but linked to major companies are where we are and will be for a while. No matter how you get to that channel Via an app, or through streaming, or on cable it matters on how they spread the debt of a 7B deal, and how they can maximize their advertising income. Monthly, add free programing is tricky.

So you are starting to see streaming platforms like Amazon Prime who are pushing their way to games only available on their channel. The Chiefs will be the first game on only Amazon. Add in the B10 and SEC and ACC networks available on streaming or cable and you have just about any sport on just about any platform you want. You need a savvy, experienced commissioner to navigate these complex deals, not some unicorn hire that is learning on the job. Warren in the B10 was helped by having a strong, great conference with a lot of options to sell advertising in huge markets. We do not.

Keep in mind Football, and Basketball National championships are on traditional channel based stations still. Why? It is where the big money is at.

Just so we are clear too, we are not the number 3 College sports Conference. The ACC is. They have stronger markets, better Football, Basketball draws nationally (recent National Champs) and other sports that have national championships almost every year too.

We are a strong 4 but I would not do a lot of crowing and beating our chest about that.