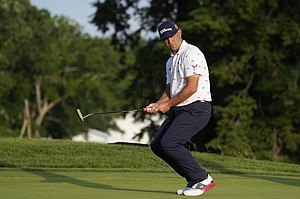 Gary Woodland reacts after a missed putt on the eighth hole during the first round of the U.S. Open golf tournament at The Country Club, Thursday, June 16, 2022, in Brookline, Mass. (AP Photo/Charles Krupa) by Matt Tait

Former University of Kansas golf standout Gary Woodland is still alive in this year’s FedEx Cup playoffs, thanks to a second-round 69 at the St. Jude Championship on Friday in Memphis.

After putting himself on the brink of elimination with back-to-back birdies at the first two holes on the back nine, Woodland survived the cut and advanced to the weekend with birdies at No. 13 and No. 15.

That gave him an even-par 35 on the back and he played Friday’s front nine one stroke under par after a birdie at No. 3 and pars on the other eight holes.

Woodland also shot a 69 during Thursday’s first round — two birdies, one bogey and 15 pars — to sit at 2-under for the under for the tournament.

Woodland finished his round nine strokes off the lead, but the chance to stick around for the weekend gives him an opportunity to move up and improve his standings entering next week’s second round of the FedEx playoffs.

Woodland, 38, has now made 11 cuts in 23 starts during the 2021-22 PGA Tour season. He has produced five top-10 finishes, seven top-25 finishes and entered the week just shy of $2 million in earnings for the season.