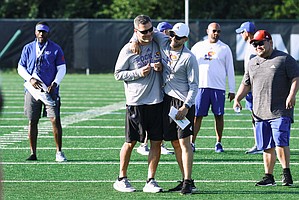 When you’ve covered Kansas football as long as I have, you’ve heard about, seen and written about all kinds of different recruiting approaches from the long list of head coaches and assistants that have come through Lawrence.

From a Kansas-first approach or heavy reliance on junior college prospects to starting with positions of need, emphasizing high school talent or targeting specific areas and regions outside of the state, we’ve seen it all.

And most of it, in one way or another, has worked to some degree. None of it has worked well enough to change the trajectory of the program, but recruiting alone has not been the problem at KU during the past decade.

The issue with KU’s recruiting efforts in recent years has not been the approach as much as it has been a lack of consistency. Changing head coaches is one thing, and KU has done plenty of that. But assistants have come and gone at an even faster rate, and the resources that the various administrators have signed off on also has been inconsistent and even handcuffed at times.

All of that is what made a recent conversation about recruiting with first-year KU defensive tackles coach Jim Panagos one that caught my attention.

Panagos came to KU after stops at five other schools and a stint with the Minnesota Vikings. He’s a veteran of the industry and his early work in bringing defensive linemen to KU has been one of the bright spots in an already solid start to recruiting in the Lance Leipold era.

Class of 2023 linemen Blake Herold and Marcus Calvin are two of the more promising prospects in the class. And it seems as if Panagos is just getting started.

It could be coincidence or it could be a sign of KU’s immediate needs at that position. It also could be that Panagos’ approach to recruiting is paying off.

It’s certainly slightly different, and more in-depth, than most that I’ve heard.

The gist of Panagos’ plan for getting players is centered on recruiting more people than just the player. He says you have to recruit the whole family when you’re going after a prospect and oftentimes that extends beyond the family, too.

“It doesn’t mean mom and dad,” Panagos said. “It’s who is the most important person in their life? And you recruit them harder than the player.”

“I call it circle of influence,” he added. “Who is their key circle of influence and how can we go attack them so when they have a bad moment you can call that person and say, ‘Listen, man, what’s going on here?’ I think that’s really important.”

That “listen, man,” part of the approach is the most critical element because it gives Panagos a way to continue to recruit players — and connect with them — even when he’s not actively involved or around him.

If the right relationships are built, Panagos said those people, whether they’re friends, coaches, family members or mentors, can help keep him up to date on what a prospect is thinking or when their eyes might be starting to stray.

“Recruiting is about hard work,” Panagos said. “The harder you work, the more results you have.”

He also said that recruiting to Lawrence has made his job easier. In fact, after recruiting dozens of junior college players from the Jayhawk Conference at his previous stops, Panagos had a picture of what he thought Kansas was.

After being hired by Leipold, his arrival in quickly changed his mind. And that, too, has helped him on the recruiting trail.

“With Kansas, it’s easy,” he said. “I love Lawrence. This is totally better than I was expecting. Lawrence is a great town. Hundred thousand people. It’s got everything here you want. We just have to get people here. And once you get them here, it’s easy to sell.”

All of it, from the circle of influence to his love of the latest college town he calls home, falls in line with the recruiting wisdom his former boss, George O’Leary, for whom Panagos worked at UCF, taught him a long time ago.