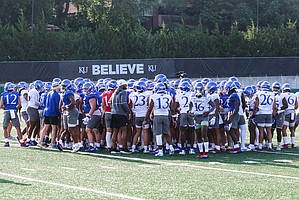 The Kansas football team huddles up during the first day of practice on Tuesday, Aug. 2, 2022. by Chance Parker/Journal-World photo

Fresh off of a family vacation, Kansas basketball coach Bill Self made a visit to KU football practice on Wednesday morning to chat with coach Lance Leipold and get a look at the team.

According to the Kansas soccer team's Twitter account, Self also stopped by Rock Chalk Park to talk with Mark Francis' club before its exhibition opener on Wednesday night.

Ever a supporter of KU’s group of gridiron warriors, Self spoke with optimism about the future of the program and emphasized its importance to all of KU’s athletic programs.

“We haven’t seen the potential of this place until football gets going like it can,” Self told Brian Hanni during Kansas Athletics’ live coverage of preseason camp. “Of course, it can’t get going unless people buy in. Lance has got all the players to buy in, the administration, the staff, but until the fans also buy in, it’s going to be a much more difficult process.”

“It’s chicken or the egg,” Self added. “Do you wait until (they) win until you come or do you come to help them win? I think the latter’s definitely the way this program needs it in order to build it quicker.”

A regular at KU’s home games throughout his time in Lawrence, Self said he was impressed by what he had seen from Leipold during his first 16 months in charge of the rebuilding program.

Self called Leipold’s organization, positivity and energy “big positives” and said the improvement the Jayhawks showed down the stretch during Leipold’s season was a clear sign that the players were on board with what Leipold and his coaching staff are trying to accomplish.

“Being able to get 100 guys to move around and be organized all the time, you know, I struggle with 12 or 13 so I’m impressed,” he said of Leipold’s organizational skills.

Self also said he thought the 12 transfers and incoming recruiting class would aid the team’s improvement, but he also noted that there were plenty of returning players who fans and coaches should be excited about, most notably sophomore running back Devin Neal and senior safety Kenny Logan Jr. Self said he thought those two, along with a few other Jayhawks, could start on most Big 12 teams.

“We haven't seen the potential of this place until football gets going like it can."@CoachBillSelf is out at camp getting you excited about @KU_Football 👊 pic.twitter.com/KLCe1XzPRG

I'm old enough to remember "Believe" was a Turner Gill scheme, and seeing this in the picture above put a chill down my spine. I still "believe" we have the right coach and staff now, but dang, can we come up with something else?!

No one will blame you for flinching at that word when it comes to KU football, Doug. Hang in there. It's a different kind of belief with Lance from what I can tell so far.

Thanks Doug. Thought I had seen it before but didn’t remember when. I’d agree with Matt, though also think believe is inadequately passive.

Good to see Coach Self lending his support to all the programs.

Doug, "Believe" is ok for LL - for him it's a totally different word than it has been under any prior coaches. By the way, TG is the Coach who will never be named again. Just think of it as a horror movie that never existed. Even though they both came to us through Buffalo, there's simply no comparison between the two.

"“Being able to get 100 guys to move around and be organized all the time, you know, I struggle with 12 or 13 so I’m impressed,” he said of Leipold’s organizational skills." It's just like the proverbial attempt at "HERDING CATS"! Coach LL knows how to do it. It has to be done through internal buy in. Getting all the key players to herd their own little group of teammates.

You may've herd this Kool Aid before, but this HC, LL, knows how to produce winners. We're gonna beat the Vegas W/L line this year.