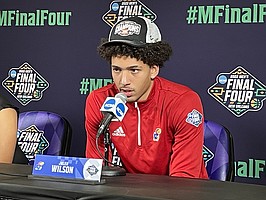 New Orleans — If you’ve seen Jalen Wilson off of the basketball court during the past couple of weeks, chances are you’ve seen him with his new favorite hat.

But it might not be the one you think.

Wilson, a starter for top-seeded Kansas who has averaged a double-double throughout the Jayhawks’ run to Monday’s national title game against North Carolina — 8:20 p.m. central on TBS — has been rocking his Big 12 tournament champions hat throughout the postseason.

It’s black, which is Wilson’s preferred color for his headgear. It sits cozily propped up on top of the third-year sophomore’s full head of hair. And it even has a piece of the net that Kansas cut down in Kansas City, Missouri, tied to the back.

“This is my favorite hat,” Wilson said this week with a smile. “It says championship on it.”

After winning the Midwest regional in Chicago, the Jayhawks received brand new Final Four hats and T-Shirts. Many wore them throughout the celebration and even onto the bus hours after the game ended.

Even Wilson tried it. On his way out of the United Center that night, he walked past me and smiled and said, “Got me a new hat.”

But he then he turned back to the old one for the trip to New Orleans, estimating that he spent no more than “a couple hours” with the white Final Four hat.

There’ll be a new hat on the line for the Jayhawks and Tar Heels tonight. If Kansas wins, you might keep an eye on Wilson to see if he’s a fan of the new cap.

Kansas' Bill Self, Ochai Agbaji and David McCormack speak before facing UNC for the title by KUsports.com

Kansas' Jalen Wilson on lessons learned from a year ago and nerves heading into the title game by KUsports.com

Kansas' Christian Braun on the respect he has for coach Bill Self by KUsports.com