Searching for ways to upgrade roster, even in the midst of uncertainty, now a key task for college basketball coaches 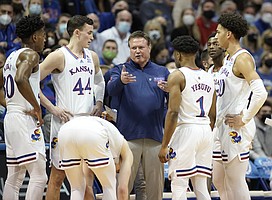 Kansas head coach Bill Self regroups with the Jayhawks during a timeout in the first half on Saturday, Feb. 12, 2022 at Allen Fieldhouse. by Nick Krug

The uncertainty surrounding the next season’s Kansas basketball roster figures to exist for at least another month. And it’ll probably linger longer than that.

Such is life in the new world of college basketball — and, really, college athletics — where players come and go in more ways than ever before.

Incoming freshmen are still a thing, though no longer the thing. And then there are players on the move via the transfer portal – tons and tons of them — and, of course, players like Christian Braun and Jalen Wilson at Kansas, who are exploring their draft stock and have about a month to do so.

Those moving parts can make life difficult for coaches across the country, at programs big and small. But the job of each one of those coaches is the same — put together the best roster you can.

KU coach Bill Self has become a master at managing these offseason challenges, gauging the interest of top talents and good fits even when it might not look like the program has a roster spot available.

That appears to be the case at the moment, with four incoming freshmen filling the scholarship spots vacated by outgoing seniors Ochai Agbaji, Remy Martin, David McCormack and Jalen Coleman-Lands. Because of the COVID exemption, Mitch Lightfoot’s scholarship did not count last season so therefore it is not available to be used now that Lightfoot is gone.

Provided Agbaji and McCormack turn pro as expected, that leaves the Jayhawks with two question marks in Braun and Wilson. If both stay in the draft, the Jayhawks suddenly would have two scholarships available. If just one of them does, the number drops to one. And if both elect to return to KU for another season, Self and company would have to make other arrangements if they wanted to add another player or two.

But just because that uncertainty exists does not mean that Self has to sit on his hands. In fact, doing so would be a bad move.

That brings us to the handful of players in the transfer portal who have reportedly been tied to KU in the past couple of weeks.

SMU guard Kendric Davis already picked Memphis and I don’t think he had any real or meaningful contact with KU’s coaches before doing so.

Iowa State point guard Tyrese Hunter has KU in his final six, and, given his talent, you’d have to think there’s a spot for him at whatever school he chooses.

South Dakota State sharpshooter Baylor Scheierman, a 6-foot-6, 205-pound wing with two years of college eligibility remaining, also has KU in his final group, which features a bunch of blue blood and Big 12 programs and was trimmed down from contact and interest from 40 or 50 programs since he entered the portal on Monday.

Scheierman has entered his name into the NBA draft pool, but, according to an article in the Omaha World Herald, the Nebraska native has identified May 15-22 as the week he wants to make a final decision about staying in school or turning pro.

The deadline for players like Scheierman, Braun and Wilson — among more than 200 other underclassmen — to withdraw from the NBA draft pool while maintaining their college eligibility is June 1.

According to ESPN.com draft guru Jonathon Givony, Scheierman has narrowed his list to a final 10. They are: Arkansas, Clemson, Creighton, Duke, Kansas, Kentucky, Mississippi State, Nebraska, Texas and Wake Forest.

In leading the Jackrabbits in scoring and to an NCAA Tournament berth, Scheierman shot 46.9% from 3-point range, draining 83 triples in 177 attempts.

Who knows if he, Hunter or anyone else who pops into the transfer portal as a potential fit for KU will actually wind up coming to Kansas. But it is now a big part of Self’s job to at least explore their interest and see if he can find a way to make his roster better.

Many believed the Jayhawks picked up the super-senior from Iowa State as insurance against then-junior guard Ochai Agbaji staying in the draft. But even with Agbaji returning to school, Coleman-Lands carved out a fairly steady and important role in KU’s run to the 2022 national title.

He played in 39 games, made one start, averaged 8.3 minutes per game and was the team’s top 3-point shooter, by percentage (44.8%) among players with 60 or more attempts.

In short, he made KU better. And while his impact wasn’t quite the same as that of portal pick-up Remy Martin, it was important all the same.

"Because of the COVID exemption, Mitch Lightfoot’s scholarship did not count last season so therefore it is available to be used now that Lightfoot is gone."

I could be wrong (I often am) but I read the exemption differently, meaning a COVID schedule-impacted player could come back and his scholarship did not count against the overall limit. Now that he's leaving, I read that as it cannot be replaced as it would put KU over the limit (or take one from another player).

I also read that the cap exemption is over meaning if Dave M comes back (Not that I expect him to) for a super-senior year then KU has to include his scholarship in the cap.

"The Hunter" has become "The Hunted"!

Tyrese is jealous of Pack, and will want at least $0.5 million per year,