Don't panic yet, KU fans; Jay Wright's retirement not likely to inspire Bill Self to head down the same path 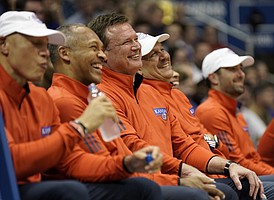 Kansas head coach Bill Self and his staff smile as they listen to the senior speeches. by Nick Krug

The one question I’ve been asked more times than any other in the 20 hours or so since Villanova basketball coach Jay Wright announced his retirement on Wednesday night has been: Do you think Kansas coach Bill Self is going to think about retiring now, too?

But it will happen someday. However, I don’t think someday is any time real soon for a number of different reasons.

Here’s a look at the biggest ones.

• First and foremost, Self repeatedly has gone on the record to say that he will not run from the current NCAA investigation into improper recruiting practices by KU.

He wants to see that thing through — for better or worse — and he wants to be the man who takes Kansas all the way to the other side of the issue, making sure, as he says, that KU is firmly where it belongs in the college basketball world.

We still don’t know when a resolution from the IARP will come down in the case, but even if it’s soon — my guess, as of today, is that we’re still at least a couple of months out — the program will need time to deal with whatever penalties may or may not be handed down and then time after that to build back up. I’d think that’s at least a two-year process and it’s hard to see Self leaving while that’s still ongoing.

• The second reason is much simpler — Self’s still having fun. It’s hard to imagine many seasons being much more fun than the one he just completed, which ended with a national title for the team he says he felt closer to than any other. And while many of those players will be gone next season, Self has another stellar recruiting class coming in and he should still have several holdovers who played important roles on the 2022 title team.

He loves KU. He’s happy with the direction of the athletic department and his program. He’s got a lifetime contract and tons of support. And he is about to step into an important role at or near the top of the list of the best active coaches in the game.

There are milestones to be had, too, but he doesn’t seem to be all that driven by those. He’s 35 wins from passing Phog Allen for most wins ever by a Kansas coach. He’s 37 wins from reaching the 800-win mark for his career and he’s 137 wins away from 900 career victories. The number of coaches who occupy a seat at the table in that last club is currently six. We’re talking some exclusive company there.

As long as it’s all still fun for him, Self likely can reach all of those marks in the next five or so seasons. I’d put my money on Self getting to them, but that number — 5 — seems like it could be pretty big here. I think it’s a lock that he’s the coach at Kansas for 2 or 3 more seasons. And I think he’ll be done coaching altogether 10 years from now. So it’s that 4-9 range that seems to be worth watching.

• The third reason is tied directly to both Wright and Coach K. Heck, you can even throw Roy Williams and North Carolina into the mix here.

As we now know, both Villanova and Duke seemed to have a pretty seamless succession plan for when the two Hall of Famers who occupied the head coach’s office at each university stepped down. Carolina’s wasn’t quite as automatic, but the search that led to Hubert Davis was quick, too.

I don’t think it’s absolutely critical for schools to have such a plan in place. But it sure seems like something that both Self and KU would like.

Many of the former KU guys who have been college head coaches (Danny Manning, Mark Turgeon, Tad Boyle, Jerod Haase, etc.) seem a little too far removed to be automatic choices to step in when Self calls it a career. If the job came open and they tossed their hat into the ring, each of them likely would get some serious consideration. But so would a bunch of other candidates.

As far as Self’s current staff, I’m not sure Kurtis Townsend or Norm Roberts would be the right pick — or would even want the job — especially if we’re talking five or so years from now.

Self’s third current assistant, Jeremy Case, is a very intriguing option, but he just finished his first year as a full-time assistant. All signs point to him being a head coach someday and to him being darn good at it, but Duke’s Jon Scheyer was Coach K’s assistant for eight seasons — and an associate head coach for the past four — and new Villanova coach Kyle Neptune worked under Wright for 10 seasons.

Case has been around Self a long time, but not in those types of roles just yet.

There is time, of course, for KU to develop some kind of succession plan. And maybe there’s already one in the works for whenever that day comes.

But just because Wright’s move was sudden and came as a shock to most, I don’t think it automatically means that Self will start thinking about following suit.

He’s human. And there’s no doubt that all kinds of things run through his brain when he thinks about the future of Kansas basketball and his future as a head coach, husband, father and grandfather.

But I think trying to win another title and having fun while doing it still remain pretty high on his list of priorities.

I hope we have Self for 10 more years. That should get him to 1,000 wins and hopefully at least one more national championship. I don't know if I like the succession plans because it limits the field, and by going after the best young coach in the game (like we did with Self) it gives a better chance for another generation of great Kansas basketball.

Well said Matt, except for “and having while fun doing it” - oops. 😉

The kids are gone and grandkids/rentals visiting so life is pretty good. The culture seems more established now than it had been. Maybe a bit too much desperation to get the NC previously.

The iarp decision is next year and maybe another for penalties plus a couple to right the ship. 65 and another NC or two would be nice.

We have been really fortunate with our last 3 hires. It’s definitely not guaranteed.

Matt, you forgot the elephant in the comparison with Neptune and Case. They both started off as video coordinators. Something that is key when you are handing the keys of a Blueblood program to the heir apparent.

This one fact alone proves that Case is the coach who will replace Self when he hangs up the clipboard.

Seriously I think Self not having to wear suits to coach might take him into his late 60's. He looks so much more comfortable now.

Dirk just me but I would have prefered to not start Roy's tenure off on probation. That was not fortunate.

I’m not sure there’s a logical candidate to succeed Self at this point.

Could It ever actually be Danny? His track record as a head coach is underwhelming.

Rodney - I’d agree; both suits and probation. That being said, Larry took us to 2 FF, won a NC, and completely changed the trajectory of the program. What was the violation anyway. Giving a kid, that didn’t play for KU, airfare to his grandfather’s funeral? I wasn’t in Lawrence at the time and kusports.com didn’t exist so I wasn’t really able to follow much.

We’ve been really fortunate with our last three BB hires. As good as the previous 4 FB hires have been bad.

While I think Matt and the commenters have the good reasons for Coach Self staying. However, my gut reaction was, 'oh, crap if Wright has a lower handicap and in retirement it is going lower Self might retire to lower his too.' We need Gary Woodland to keep talking to Self about Self's golf game and his NOT retiring."

I used to sit next to Jeremy Case and Moulaye Niang in Biology 100 lecture.... probably spring semester 2006... and Case was always asking for help on the quizzes.

Not saying that would disqualify him from being a head coach 20 years later, but those were probably the easiest quizzes I ever had. That said he was a coaches son, and it is cool to see him progress into an assistant coach.

Bill Self leaving Kansas is an event I hope to never live through.. Dealing with Larry Brown leaving was the most difficult non-family event I've ever had to deal with....until it was announced some guy named Roy Williams was taking over. As if that wasn't bad enough, dealing with Roy's departure was worse of all. Hiring Bill Self wasn't so bad but contemplating Self leaving is something new unheard of thing to deal with....sort of like dealing with aliens taking over the planet.

Dirk it is no surprise you defend Brown without any shred of logic. Manning took us to two final fours and a championship, Brown was along for the ride, just like Mannings father was.

Anything Brown touched here has a smudge on it. Even the banners. It is possible to appreciate the accomplishment while admitting to the price we all paid to have Brown here.

It is not fortunate in any way to be put on probation. Larry was never a follow-the-rules guy.

Brown did not change our trajectory, Dean Smith did.

Objectivity Dirk. I know it is foreign for you to look at things without the dark rose colored glasses you love to wear, but you have to face facts sometimes.