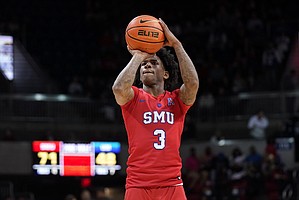 When his name first surfaced in the transfer portal, SMU guard Kendric Davis’ popularity sky-rocketed at college basketball programs across the country.

Monday night, Kansas fans found out that their dream of adding the reigning American Athletic Conference player of the year to the defending champs’ roster for the 2022-23 season was at least a real possibility.

KU made Davis’ list of seven finalists, according to his Instagram page. What’s more, he said he plans to make his next stop known at 8 p.m. Friday.

A few powerhouse programs join the Jayhawks on Davis’ trimmed-down list, with Gonzaga, Texas, Houston and Texas Tech leading the way. TCU and Memphis are also still in the mix.

He also averaged 4.4 assists and 3.9 rebounds per game while shooting 44% from the floor and 87% at the free throw line.

While some have said that Davis choosing Kansas would put him in line to be next season’s Remy Martin, it’s worth noting that he does not carry quite as much in the way of buzz and hype as Martin did a year ago.

It’s close, though. He already is regarded as one of the top transfers available, and, at 6-foot, 180 pounds, the talented point guard is roughly the same size and could play a similar role to the one Martin played for the national champion Jayhawks this season.

Wherever Davis lands, it will be his third stop in college.

A native of Houston — he attended Sam Houston High — Davis started his college career at TCU, where he played 17.1 minutes per game in 37 appearances and two starts as a true freshman during the 2018-19 season.

He transferred to SMU after that season and started all 77 games he appeared in for the Mustangs during the past three seasons.

In addition to entering the transfer portal, Davis also has announced his plans to pursue a jump to the NBA, declaring for this summer’s draft while planning to retain his college eligibility.

Even that is reminiscent of what Martin did before coming to KU.

After deciding to leave Arizona State following a spectacular four-year career with the Sun Devils, Martin first declared for the 2021 NBA draft then committed to KU and finally elected to withdraw from the draft pool and play his super-senior seasons at Kansas.

Talking in general terms about where KU was in terms of recruiting additions to the 2022 class, Kansas coach Bill Self said after the team’s postseason banquet last week that the Jayhawks were “open to whatever.”

“A lot depends on guys’ decisions,” Self said of early entries into the NBA draft or the ever-present potential for offseason transfers. “I personally think with the likelihood that (Ochai Agbaji) is probably not going to be back, we certainly could use a guard, a tall shooter or guard who can play maybe combo. We’d like to get a guard who can score the ball.”

Davis does not fit the tall part of that description, but he certainly has proven he can score. Davis carries a career scoring average of 13.8 points per game, including double-digit averages in each of the past three seasons, 19 per game as both a junior and senior at SMU.

Fun fact: He scored 16 points in 36 minutes in a TCU home game against Kansas in February of 2019. Davis shot 4-of-9 from the floor in that game — a KU win — and added 7 assists and 5 rebounds while knocking in 7 of 11 attempts at the free throw line.

Regardless of where Davis commits, he will have until June 1 to decide whether to join his new school or stay in the NBA draft pool.

Making his next stop known at 8 p.m. Friday is interesting timing considering he’s declared and so many others are up in the air.

Is it a bad sign for Yesufu? Still hoping he blossoms, but he didn’t consistently produce this season.

Dirk you may have something about Yesufu . Guard wise you got Cuffe Harris and Pettiford
In the mind of Yesufu he wants to play but it doesnt look likely .............but he does have a championship so if he did transfer out he will always have that championship.
As far as Davis and what he did at SMU that doesnt mean much if you dont play Bill Self basketball ............e.g. Remy Martin ........Even though Coach Jankovich recently retired he may have some influence in Davis' decision given Coach Jankovich has Kansas ties with Coach Self . But he would be a nice edition

There is always a balance between adding experience, and driving away those with more potential, who lack it.

I would caution that all transfers are not Remy Martin. His ability to turn it on when it mattered, is mind blowing. Most players hurt and without as much action as he got, simply would not have been able to perform on such a big stage.

I trust Bill and the other coaches to decide what is best.