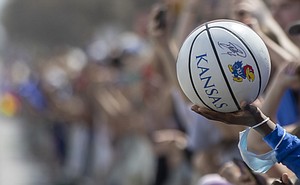 A fan holds out a KU basketball in hopes of having a KU player sign it during a parade to celebrate the KU men’s basketball team’s NCAA basketball championship Sunday, April 10, 2022. by Mike Yoder

North Carolina big man Armando Bacot’s decision to return to UNC for his senior season was way more than a victory for the Tar Heels.

It also represented a huge win for the name, image and likeness movement in college athletics.

There’s no telling what kind of benefits NIL will bring to Bacot during the next year. But given the fact that he’s a well-known and noticeable player who just took his team to the brink of a national title, it’s safe to say that some significant opportunities will be there.

Playing at one of college basketball’s true blue blood programs and with ties to the Jordan Brand certainly will not hurt either.

It’s hard to know if Bacot would have made this decision anyway. His announcement was all about his love for the program and wanting to bring a title to Chapel Hill. So it’s certainly possible that a fourth year at UNC was enough to bring him back.

But with NIL now a major part of the college athletics landscape, athletes who once had no choice but to turn pro when their stock registered the hottest are now starting to see returning to school as a viable and profitable option.

That’s not only good for college athletics, but it also could be really good for Kansas basketball.

You don’t have to think too long to come up with a list of former Jayhawks who turned pro early but might have preferred to stay in college for another year.

Joel Embiid flat-out said he wanted to stay. Ben McLemore and Xavier Henry announced they were leaving with a heavy dose of tears. And there have been others who, even though things worked out well for them after leaving, might not have been quite ready to say goodbye when they did.

With the impact of NIL deals still being developed and the earning potential that comes with them soaring through the roof, the idea of staying in college a little longer is suddenly not so crazy. Nor does it come with as much of a financial risk.

Sure, the possibility still will exist that coming back and getting injured could significantly alter one’s pro career and cut into his or her earning potential. But if you’re earning money while in college, as is now legal, even an injury in the year after returning might not be quite as devastating as it once was.

Potential is a key word in this conversation because it is seemingly endless.

With college athletes now able to sell their own merchandise, make money off of appearances and autographs, collect cash from businesses for sponsorships and even get paid by a brand as big as Adidas for simply playing college sports, it’s not hard to see how those paychecks could add up fast.

In late March, Adidas announced that it soon will launch NIL opportunities for more than 50,000 student-athletes tied to its 109 Division I partners across 23 sports. Athletes will be paid as affiliate brand ambassadors — wear the gear, score the points, smile and look good on camera, etc. — and the individual value of each athlete will be tied largely to his or her exposure and notoriety.

Just how much — and also how easily — now figures to be part of the conversation not only when athletes are picking schools but also when they’re deciding how long to stay at them.

In a recent interview with the Journal-World, second-year Kansas Athletic Director Travis Goff said he thought the NIL landscape had become “murkier” in the nine-and-a-half months since athletes making money off of their name, image and likeness became legal in college athletics on July 1, 2021.

With so many angles to consider and areas to monitor, not to mention having to wrestle with the question of exactly what role a university can and should have when it comes to NIL and its athletes, Goff said figuring out how to manage NIL has become one of the most important challenges facing college athletic departments today.

KU was slow to roll out its NIL plans and that was by design. The school’s Jayhawks Ascend initiative, which was announced on July 30, 2021, was more of an all-encompassing tool for KU’s student-athletes, emphasizing the importance of everything from brand management and how to handle NIL opportunities to maximizing resources and preparation for opportunities beyond one’s time at KU.

KU also has worked with third parties — most notably 6th Man Strategies — to bring NIL opportunities to student-athletes in a number of different sports.

Asked recently how he would grade KU’s work thus far in the NIL world, Goff gave his department a B- or C+.

“We’re OK,” he said. “And there’s been cases where we’ve been pretty good. But we’re far from excelling.”

That, too, is by design.

With the NCAA investigation into improper recruiting practices at Kansas still being reviewed by the Independent Accountability Resolution Process, Goff said he believed it was best for KU to blend into the NIL world for a while.

“Because of other insinuating circumstances, it’s probably not the right thing for the University of Kansas to be the most progressive, aggressive NIL place in the country,” he said.

However, Goff acknowledged that eventually having an NIL program that is as competitive as any out there, especially for KU’s men’s basketball program, would be critical in keeping the Jayhawks competing for national titles year in and year out.

“When you’re only basically recruiting top 50 prospects in a sport, then NIL is absolutely at the forefront for any of those prospective student-athletes,” Goff said.

To that end, KU recently announced a men's basketball barnstorming tour of the state in which all 18 members of the 2022 national championship squad will be eligible to participate in and profit from meet-and-greets, autograph sessions, skills camps, pick-up games, VIP dinners and more. The first barnstorming date is set for 2 p.m. Saturday at Wichita East High School.

As for how NIL factors into the future of KU’s football program, Goff said he has watched those trend lines follow the general state of the program under second-year head coach Lance Leipold.

“If you go back to July and August, there wasn’t a lot of energy around Kansas football and NIL,” Goff said. “And we’re seeing more and more today because it’s aligning with the general recognition that this program is on exactly the path that it should be and it’s got exceptional potential.”

To date, 6th Man Strategies has delivered more than $200,000 in gross sales of officially licensed Kansas basketball merchandise through the retailer Rally House.

While the new endeavor will bring greater opportunities to KU football players in the immediate future, Goff said he had not received any negative feedback from frustrated coaches, athletes or parents about NIL opportunities being slow to trickle down to their sports.

“People just understand,” he said. “And they can see that that’s coming for other programs, too.”

The Addidas announcement and NIL in general might make it more difficult for KU to be punished via the iarp.

It seems to be removing the cloak of secrecy in recruiting. Doesn’t seem incredibly different than what has been going on for many decades. Could easily see it leading to greater imbalances. Bigger fan bases means bigger value and bigger disparities.

I love that Jared (& others) got his Applebee’s commercial, but there would seem to be a need for a lot more management to keep any semblance of competitiveness.

Well that would be an ironic positive, wouldn’t it?

A rookie AD, poor choice in choosing the NIL "partners". A C grade so far and we want them working with the football team? It's like watching a train wreck in slow motion. We are in a small market and have no Conference TV channel either.

The Adidas thing sounds nice, but it is for all their schools.

Goff might as well reach out to the business school for ideas. They couldn't be any worse than what we have right now.

Didn’t they just win a title with average recruiting ranking around 125? But we have to pay top 50 guys to be able to win…it’s like nobody’s paying attention.