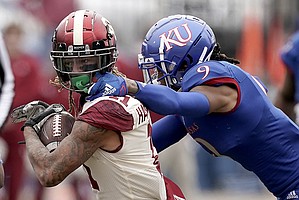 One was a victory and the other a loss, but the argument could be made that Saturday’s 35-23 loss to No. 3 Oklahoma at David Booth Kansas Memorial Stadium was much bigger than the home win over Texas five years ago that felt awfully similar to what nearly took place on Saturday.

Hindsight helps make that argument, of course, as we now know that defeating the Longhorns on that November day in 2016 did not bring the momentum and better days that many Jayhawks hoped it would.

Let’s examine the two outcomes and take a look at why this one might be different.

For one, Oklahoma’s pretty good and that Texas team was trash.

The Sooners, like ’em or not, are ranked No. 3 in the nation and sit at 8-0 overall and 5-0 in Big 12 play, smack dab in the middle of the College Football Playoff conversation.

Those Longhorns? The loss to Kansas that day dropped them to 5-6 on the season and was more or less the final straw that led to Charlie Strong getting fired.

Beyond the difference in talent between the two teams, this result came in the middle of Lance Leipold’s first season and not at the end of a new coach’s second.

That might seem like a small-potatoes difference, but, before you write it off, consider the difference in the number of practices, games, recruiting visits, film sessions and offseason workouts between those two points in a coaching career.

These guys are just getting started. As history has now told us, that Beaty bunch was almost done.

One game does not a rebuild make, but given that they were outscored 100-21 in the two games leading up to Saturday’s game against the Sooners, these Jayhawks needed an outing like that.

They needed it to convince them that the work is worth it.

They needed it to convince them that the new coaching staff is capable of leading them where they want to go.

They needed it to keep the fan base from completely checking out.

The expectation, back in 2016, was that the win over Texas would provide many of those benefits, too. It didn’t.

Instead, the Jayhawks lost the very next week in a sloppy 34-19 setback at K-State and then went on to lose 11 of 12 games the following season by an average score of 41-17.

When you’re rebuilding, you’re only as good as your next game. Sure, you can stack building blocks and collect momentum along the road. But if you lay an egg the week after an encouraging effort, all of the work that went into that feel-good moment immediately — and almost entirely — disappears.

Sure, the Jayhawks want to add to their momentum. And, yeah, their goal will be to try to win the game. But even just playing well and finding a way to be in the game would go a long way toward making this week’s unexpected close call against OU actually mean something.

There were a few years where we got victories that seemed to lead to the demise of a coach. Strong, Hawkins, and one or two others iirc.

The win over Texas cost the KUAD millions due to the raise and extension given the Beatty. He was clear the most under qualified individual holding a Division 1 football head coaching job. The win gave him more time to destroy the program.

Important points to think about. Thanks Matt.

Fortunately, the roster and coaching staff are both in a much better situation now than then. In the first case, the roster was just getting rebuilt an FCS level and still years away from FBS. We’re much closer today even if we are still very young. Previously, the salaries for all the coaches were also well below market rates. Now we not only have qualified coaches being paid market rates, but with a proven record of successfully working together.

It will likely still take a while to become successful (winning record), but we are still moving in the right direction.