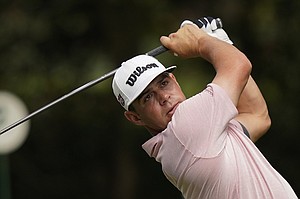 Gary Woodland tees off on the second hole during a practice round for the Masters golf tournament Tuesday, Nov. 10, 2020, in Augusta, Ga. (AP Photo/David J. Phillip) by Matt Tait

Former University of Kansas golf standout Gary Woodland shot a 4-under-par 67 during Thursday’s first round of the Wells Fargo Championship at Quail Hallow Club in Charlotte, leaving him just three strokes back of first place and among the leaders.

Woodland finished the day in a tie for fourth place after firing six birdies with just two bogeys during his opening round.

Phil Mickelson sits in the lead all by himself after the first 18 holes. Mickelson shot a 7-under 64 on Thursday.

Kyoung-Hoon Lee and Keegan Bradley are tied for second at 5-under and Woodland is tied with Peter Malnati, Tommy Fleetwood, Luke List, Keith Mitchell and Kyle Stanley.

Woodland will begin his second round at 6:45 a.m. Friday and will be playing with Canadian golfers Nick Taylor and Corey Conners.

Woodland missed the cut last week at last week’s Valspar Championship after finishing in a tie for 40th at the Masters in mid-April.

Gary hasn’t had a very good year. Way down on FedEx points and money list. Here’s to hoping he can break out of his slump and play some good golf.

Gary hasn’t had a very good year. Way down on FedEx points and money list. Here’s to hoping he can find a rhythm and have some good finishes in the weeks ahead.